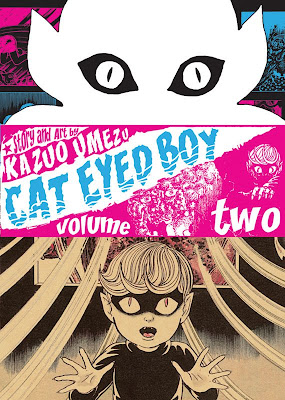 I missed out on responding to Tom Spurgeon's most recent "5 for Friday" questionnaire, Right to Left, or, "Name Five Manga Series You Personally Are In The Midst Of Reading, Whether Or Not The Series Is Ongoing Or Finished." Since the last time I reviewed a random manga title was awhile ago, I thought I'd respond to Spurgeon's quiz here:

The most recent translated Japanese comic I read was Seiichi Hayashi's Red Colored Elegy, a wonderfully evocative existential graphic novel about two young lovers in 1970s Japan, which the comics critic Bill Randall has suggested owes a large debt to gegika pioneer Yoshiharu Tsuge. But this is a stand-alone novel, and one of the better ones I've read this year. In terms of multi-volume stories, however, my reading has generally been limited to adolescent and melodramatic genre fare.

1. Cat-Eyed Boy and The Drifting Classroom, by Kazuo Umezu

The beautifully packaged Cat-Eyed Boy (published by VIZ) tells the story of the titular feline demon, equal parts Tintin, Sluggo, Ditko-era Peter Parker, and Klarion the Witch-Boy, an itinerant monster-fighter who enjoys living in people's attics and defending children and their families (usually against their will) from (sometimes quite disturbing) manifestations of evil. Cat-Eyed Boy is a perfect serial character (the stories originally ran in a kids magazine with a horror edge, a fact referred to in several episodes), with a built in appeal to younger readers centred on the hero's rejection by society as well as a childlike approach to plot and narrative logic, not to mention horrific, "I dare you to look"-style imagery. The stories are disgusting, scary, hilarious, and emotionally powerful. I burned through the two-volume omnibus edition of these books, and the horrific images, humour, and cartooning artistry have stayed with me. The amazing, Willy Wonka-flavoured book design is discussed by Chris Butcher here).

By contrast, I am slowly savouring Umezu's magnum opus, The Drifting Classroom, ordering two volumes at a time and waiting anxiously between installments (I've just finished volume 6). The story, about an entire school of Japanese children mysteriously transported to a post-apocalyptic future, and the resulting Lord of the Flies-style debacle that ensues, is a breakneck, fast-paced horror-thriller about loyalty, familial love, politics, savage murder, giant insect creatures, Plague, and the howling fear of imminent, inevitable dirty death. The original serial nature of the work shows in its overall frantic pace, where events tumble over each other, unchecked, with very little in the way of pacing, reflection or character development. But it is thrilling, sad, and spooky.

I've only read the first volume of Vertical's 3-volume collection of this disturbing 1960s Tezuka classic, written in the vein of Kurosawa meets Frankenstein. The story, about a young urchin who teams up with a ronin, who is really a bizarre Pinocchio-like character whose body parts have been stolen by demons, is gross and mesmerizing, with great storytelling and Tezuka's patented cross-genre goofiness. The book design of this series, like most of Vertical's offerings, is beautiful.

I first became aware of Nana, a sort of punk soap opera several levels below, continents and generations removed from Love and Rockets, by flipping through the pages of Shojo Beat magazine at the grocery store a few years ago. The most accessible, recognizingly human, and serious of the many girls' manga series on the market in North America that I've encountered, the story, about two young women trying to make it in the big city, is compelling, humourous, and sharply-drawn. Very much a melodrama, the book packaging of the first two volumes I have is reflective of the intended audience, with muted colors and thoughtful imagery.

4. One Piece by Eiichiro Oda

This serial is one of the very few boys' series I can even stand to look at in Shonen Jump magazine, thanks to the open, fluidly dynamic and cartoony style of writer-illustrator Oda. The story, about a Plastic Man-empowered wannabe boy-pirate in search of a mythical magic coin with his Jason and the Argonauts/Seven Samurai company of super-powered fighters (think Jimmy Olsen meets the plot of Fantastic Four #5, forever), is strictly pulp boilerplate and shows no sign of ending soon (there are over 50 volumes). Moronic and basically for kids, it is nevertheless one of the most coherent and appealing of the popular comedy-adventure fight comics.

I am "in the midst of reading" this series only in the sense that I stopped before finishing the final volume. At the time of first reading, the series just became too cyclical and frustrating, after a pivotal set-back/do-over half-way through where a major protagonist was replaced by a younger variation of himself. The series, about a highschool student who is granted the demonic power to kill people at a distance by writing their name in a notebook, is a tense, page-turner of a gothic thriller, relentless in its pacing, and full of agonizing reversals, hairbreadth escapes, gasp-inducing shocks, moral quandaries, and crazy-explosive Hollywood set-pieces. The Byzantine story and plot mechanics are very nicely complimented by the laser-sharp daring of Obata, a virtuoso cinematographer to writer Ohba's Hitchcock-ian plodding.
Posted by BK at 5:00 AM No comments: 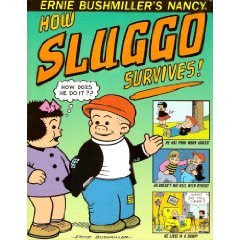 I found this book as part of a Mystery Hoard that included, in total, 3 issues of Wizard Magazine and a giveaway Spider-Man comic.

How Sluggo Survives is a collection of Ernie Bushmiller's Nancy comic strips that focuses on Nancy' co-star and sometime boyfriend, Sluggo. Sluggo is a tough working class kid with no visible means of support, modeled after the slang-talking, newsboy-cap-wearing inner-city kids of U.S. popular culture, akin to Hollywood's Dead-End Kids and Jack Kirby's kid gangs.

This is a fascinating volume, part of a series of themed reprints published by Denis Kitchen during the short-lived Nancy renaissance of the 1980s, when everyone from Frank Miller to various Underground and RAW alumni were singing the praises of the so-called 'dumbest comic strip' ever. One of the best parts of the book is the introduction by reclusive control freak, painter and RAW Magazine cartoonist Jerry Moriarty. Moriarty sums up the appeal of Nancy for the Underground generation as "brain repair," noting that "[b]eing a reluctant Ernie Bushmiller fan also said something about esthetic renewal and ongoing change and hope." Moriarty's essay is accompanied by notes from his alter-ego, Jack, of "Jack Survives" fame. The conceit of this Jack piece is that Jack has been a living in Nancy's town and has observed her adventures with Sluggo from a distance, although he sometimes feels like he is observing something resembling the activity of another dimension, perhaps the creation of his elderly neighbour Bushmiller.

The strips in How Sluggo Survives seem to have been chosen for the degree to which they reveal aspects of Sluggo's life away from Nancy. Many intriguing snippets of his existence are revealed, including Sluggo's address (140 Drabb St.), his various jobs (office boy, delivery boy, scrap dealer, grifter, goldbrick), and portents of his future --a recurring gag revolves around the fortunes he receives from one of those "weight and fortune" amusements that used to litter the commercial districts of every town in North America. Sluggo is a fascinating, mysterious character: a proto-punk hobo child who oozes America from every inky line.

Since I grew up largely post-RAW, I've always taken for granted the canon-icity of Nancy and so the Nancy naysayers and those who argue that Bushmiller's strip is moronic (or even those who appreciate Nancy in an ironic or, "so bad it's good" sense) have always puzzled me. The strip is well-crafted, charming, and, more often than not, very funny and thought-provoking. Highly recommended!