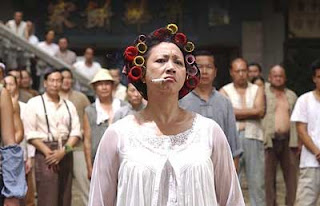 So we finally saw Kick-Ass last night. Not having read the book besides seeing a few pages online and in interviews, I had to judge it solely as an original work and not an adaptation. The goofy plot --average joes with mental problems dress up as superheroes and kill gangsters, finding love and redemption along the way-- was dotted with several nice suspenseful action set pieces but the whole thing was marred by a laboured voiceover device and lots of other cliches that were insufficiently shielded by the film's generally ironic tone. Sure, superhero stories are all going to have an element of the cliche, being basically made up of squashed-together elements of action movies, bad scifi, crime fiction, and adventure comic strips, but at this point we expect a little more from the genre, given its varied history in print and on screen, than some half-hearted, cynically controversial post-modern toying with convention and morality. At this point, it's all in the execution and it's no surprise that when we walked out of the theatre last night, the poster for the movie that is replacing Kick-Ass, a romantic comedy with Jennifer Lopez, was already in place.

Other, Better Superhero Movies (many from the same year)

5. Batman (1968) This movie version of the Adam West tv show has all the qualities that made the series great. West's deadpan mock heroism, great visuals, classic villain/b-listers mugging and camping it up, a goofy plot and a tone that makes it accessible to a variety of audiences.


4. Ultraman (1967) My first introduction to the character and the Japanese tv show, this movie condenses the series into a crazy battle royal featuring the giant space policeman and a cast of costumed monsters (including Gomora). Very interesting colour, humour, and fantastic miniature and set design combine with a confusing garbled narrative, traditionally funny dubbing, and a sense of childish wonder to make a very entertaining work of art.


3. Spider-Man 2 (2004) The best of the recent crop of Marvel comics adaptations, this episode has all the great soap-opera romance of the Lee-Romita comics with improved special effects, just enough jokes, and the continuing appeal of Tobey Maguire.


2. The Incredibles (2004) This animated take on superheroic family dynamics a la the Lee/Kirby Fantastic Four is funny, well-plotted, has good vocal performances and is gorgeous. The animation naturalizes the superpowered action in a way that seems impossible for live-action and the film has many nods to comics and previous movies that doesn't detract from a simple story with great design, "effects," and affection.


1. Kung Fu Hustle (2004) Steven Chow's chopsocky epic is a wonder-filled homage to Hong Kong genre film but it also is about the secret origin of a superhero who learns that with great power comes great responsibility. Crosses over the thin line that separates kung fu movies from superheroes, filled as it is with secret identities, costumes, and super powers. A fast-moving, funny plot, really quite beautiful music, and, of course, fantastic gravity-defying fight scenes.
Posted by BK at 11:06 AM No comments:

-Two new things over at Sequential: this week's Canadian Bestseller List for graphic novels, and a review of Michael DeForge's new book, Lose #2.

-Michel Rabagliati is a bestseller in France, in Canadian bestseller terms.

-For the Wright Awards I'm going to be listing some fundraising art by past nominees on ebay. Some nice homages to classic DC superheroes from the likes of Joe Ollman, Jeff Lemire (picture) and Diana Tamblyn are already "in the can." Plus more I haven't seen. Exciting!

-via twitter, cartoonist Hope Larson is adapting Madelyn L'Engle's A Wrinkle in Time for Farrar Straus & Giroux, even though she notes L'Engle didn't want her books illo'd. She may have a fine line to walk pleasing older fans while introducing a new generation to a classic in her own style.

-Toronto artist/performer Robert Dayton has been posting scans of the awesome Nellie No-Date strips by Ogden Whitney.
Posted by BK at 2:45 PM No comments:

Email ThisBlogThis!Share to TwitterShare to FacebookShare to Pinterest
Labels: newsfeed 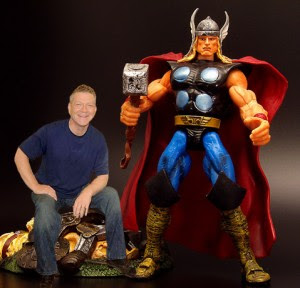 Yes, the Thor movie news keeps rolling in. What a marvelous event this film will be.