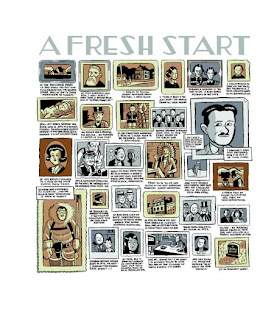 Finally got around to slapping together my 2009 in review post for Sequential, summing up the major events and themes in the anglo side of Canadian comics over the past year. Rather than talk about the economy (boring!) as the major story, I decided to go with a look at Seth's success and how the reception of his books can be read as a positive story for our comix culture in general. I went with Seth even though other cartoonists seemed to get just as much attention for individual projects. The giant edition of Jeff Lemire's collected Essex County opus, his new Vertigo series, and the Nobody graphic novel were certainly big news and say quite a bit about comics publishing and the place of young cartoonists today. Ditto the hype around the latest Scott Pilgrim graphic novel and the upcoming film project starring Michael Cera. Bryan Lee O'Malley feels like the hot cartoonist of the moment, but I think his star will burn even brighter in 2010. Nope, for 2009 it was definitely our man in the chapeau and his bevy of books...
Posted by BK at 1:29 AM 2 comments: 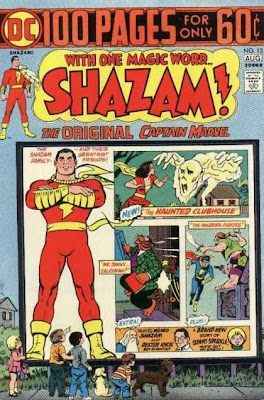 The latest entry in the Canadian Comic Fan Project comes from a 1970s issue of the Shazam! comic book. The letters page was called Shazamail. During the 70s, DC tried to revive the Marvel Family franchise, in tandem with a live-action tv series. The comics were written by Elliot S! Maggin and E. Nelson Bridwell, and they were even drawn by some of the original marvel Family artists like CC Beck and Kurt Schaffenberger. The stories were never quite as fun or original as those of the 40s and 50s, but they were great looking and generally well-crafted. Plus, there were lots of reprints of the old stories, many of which have not been reprinted. As in previous decades, fans were split over who they like better and the place of humour in superhero comics. Back in the day, Captain Marvel outsold Superman, but the owners of Superman eventually sued the owners of Cap for copyright infringement. The bonus was that both Schaffenberger and writer Otto Binder came to work for DC and ironically created some of the best Superman Family stories and characters. 1970s fans debated some of the same issues.

Dear Editor,
Captain Marvel is a totally irrelevant and unrealistic character and I love him. He possesses a certain charm, a charisma all his own that is totally different from the colossal, serious, world-saving Superman. Let Superman prevent the world from splitting in two. Captain Marvel will worry about a talking tiger or a pet monkey. Superman will keep us rooted in our seats, while Cap engagingly entertains us. Captain Marvel is a complete escape with down to earth dialogue and exquisitely simple artwork. Long stories would detract from the intent of the comic and the hero. The short stories fit in nicely with the overall character and all stories should be left that length.

As to the question of who will win the sales battle of the 70s, I think that Captain Marvel will, in a close fight. Having not previously seen a hero of Cap's calibre, today's generation will scramble to buy this comic. In their eyes --and I am speaking of young children-- a hero who humorously concerns himself with the fate of pets and young tykes will be their idol. Although it is we hard-bitten fans who critically analyze comix as art, it is the children who buy most of your comix and increase your sales. Trying to strike a happy medium between fandom and sales isn't always easy, but you usually pull it off.

Alas, Shazam! was soon canceled (whether through publisher antipathy, consumer ignorance, or the DC implosion, is unclear) and Superman continued as the flagship character, buttressed by multiple comics titles, toys, animated cartoons, and the 1970s Richard Donner movie. However, the critical consensus lately seems to be tilting towards the Captain Marvel end of the spectrum, with everyone from Jeet Heer to the Comics Comics gang to Ben Schwartz taking up the magic word and agreeing with Dave Steele of Calgary that Shazam! comic books are the best.
Posted by BK at 12:42 AM No comments: