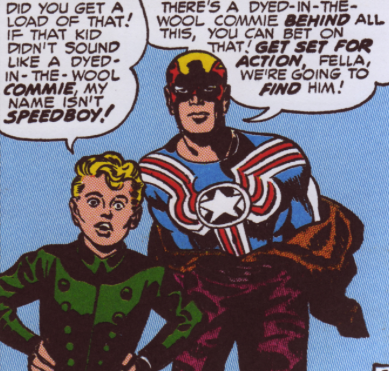 Kirby was very much of his times in the post-War world. Although many of his heroes seek solutions in collective action, many of his early characters were individualists and his themes tended towards the little guy against vast conspiracies...

From the Comics Journal interview with Gary Groth...

GROTH: Who did you deal with at DC? Did you have an editor that you dealt with directly?
KIRBY: They had several editors. I dealt with Mort Weisinger, Julie Schwartz, and Murray Boltinoff.
GROTH: Can you distinguish between the editors? Did they have different approaches?
KIRBY: They were different personalities certainly, but they were all great to get along with. We’re still good friends. Mort Weisinger is gone. When we first moved to California, Mort Weisinger came to visit us.
GROTH: What kind of man was he? I understand he was a tough taskmaster.
KIRBY: Everybody was a tough taskmaster. Mort Weisinger wasn’t a particularly tough taskmaster. He was trying to do an editor’s job. Comics have a caste system — an editor has to act in a certain way, an artist has to be humble, right? An artist has to be humble, an editor must be officious, and a publisher must be somewhere out in the galaxy enjoying godhood. It was a caste system, pure and simple. And it was accepted that way. Nobody thought of contracts, nobody thought of insisting on better deals.

GROTH: Did you assume when you did a book — any one of the many books you’ve done — did you assume that the publisher owned it? Or did you think about it a little later and think, wait a minute, I did this and I didn’t have a contract, and I don’t see why he should own it 100 percent.
KIRBY: No, I was growing up and becoming aware of those things. Joe Simon knew about those things.
GROTH: At the time you just assumed that the publisher owned it?
KIRBY: Yes. I assumed that he took it, OK? [Laughter.] I assumed that he took it, and I didn’t have the means to get it back. In other words, I didn’t save my money for a lawyer. I was a very young man, and saved my money for having a good time.
GROTH: I understand that sometime in the mid-’50s Bernie Krigstein tried to start a union among comic book creators. Were you aware of that?
KIRBY: I was aware of it. It was something that I knew would fail.
GROTH: But you didn’t go to any meetings?
KIRBY: No, no. Unions almost had the connotation of communism.
GROTH: You were wary?
KIRBY: Everybody was wary. Remember, this was a time when communists marched through the streets, waving flags and shouting. The unions did the same thing so you began to associate them. I’m speaking now as a human being, not as a businessman — the unions are great. The unions are great for the working people because they protect you, but I didn’t see them that way as a young man. First of all, the papers would connect them with thee communists — labor unions were communists.

And Joe Simon on Fighting American, from Wikipedia and the intro to a 1989 Marvel collection:

Simon said in 1989 that he felt the anti-Communist fervor of the era would provide antagonists who, like the Nazis who fought Captain America during World War II, would be "colorful, outrageous and perfect foils for our hero." He went on to say,

The first stories were deadly serious. Fighting American was the first [C]ommie-basher in comics. We were all caught up in Senator McCarthy's vendetta against the 'red menace.' But soon it became evident that McCarthy ... had gone too far, damaging innocent Americans.... Then, the turnaround, [as] his side became talked of as the lunatic fringe.... Jack and I quickly became uncomfortable with Fighting American's cold war. Instead, we relaxed and had fun with the characters