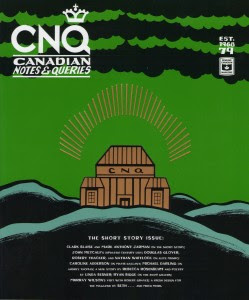 Seth redesign for CNQ! Canadian Notes and Queries, the venerable literary journal launched in 1968, has received a facelift courtesy of the pen and brush of cartoonist Seth. Now the iconoclastic reviews and essays are matched in their wit, humour, and laser-sharp lacerating criticisms and insights by Seth's classically whimsical aesthetic, as expressed through his new logo, lettering, illustrations and cartoons, including new mascots Hudson and Stanfield, all wrapped up in a new cover by the artist.

Edited for many years by the dean of Canadian letters, John Metcalf, CNQ features some of the best reviews, interviews and literary history published in Canadian journalism. This issue (#79) features an hilarious eviseration of the Giller nominees (Ann Michaels included) by Ryan Bigge, Metcalf's "Century List" of the 40 best short story collections of the 20th Century, a review of Leon Rooke by Jeet Heer, and a cartoon by Seth. Plus tons of other stuff. A perfect companion to the latest issue of the Walrus which also has a Seth cover and an article by Andre Alexis about the decline in Canadian criticism which Alexis blames on Metcalf et al --the sentences vs structuralism/critic vs academic debate.

The magazine had been sporting a more accessible look over the last few years but it still fell 'squarely' into the literary journal pigeonhole, with photos of old writers and editors on the cover, long columns of unadorned print and a generally dry, serious design. The new design seems to open the mag up a bit, the shiny saddle-stitched cover and Seth's drawings and hand-lettering making the criticisms of the CanLit establishment and the variety of essays about short stories and Alice Munro's perfection more easily digestible.
Posted by BK at 7:50 PM No comments: