Comics in Film: Apache Kid in Cronenberg's The Dead Zone 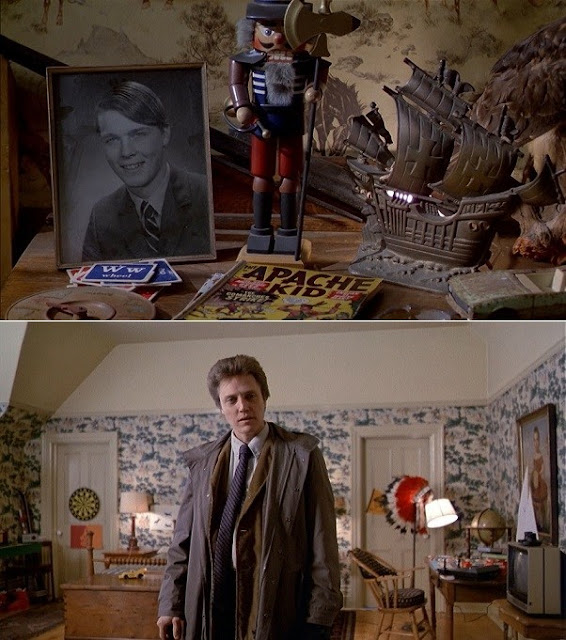 Comics in Film: The Dead Zone (1983). A copy of Apache Kid #53 in a serial killer's bedroom. The comic book appears in the childhood bedroom of Deputy Frank Dodd, the Castle Rock Killer. Dodd (played by Nicholas Campbell) retreats to the seemingly derelict home where he lives with his over-protective mother, pursued by his boss Sheriff George Bannerman (Tom Skerritt) and precog John Smith (Christopher Walken), after Smith correctly identifies Dodd as the man responsible for a series of rapes and murders in a small New England town. The killer's room is littered with many childish features, from its cowboy wallpaper to broken toys to a rocking horse, and is part of the film's obsession with rooms and childhood. The "Cowboys and Indians" theme is repeated in another room later, when Walken's character visits the home of a millionaire with a troubled son who needs tutoring. Apache Kid #53 (really #1) was published in 1950, and is a regular western-hero-with-secret-identity character typical of the period. The cover to this issue is drawn by Joe Maneely, the main artist for Atlas/Marvel during the 1950s before his untimely death in 1958 led to Jack Kirby returning to the company and starting the revival of superheroes. Other stories in the issue are drawn by Syd Shores and Mike Sekowsky. The appearance of the comic in the film is a nice touch, playing with the Wertham-esque idea of comics as junk culture responsible for juvenile delinquency and violent and sexually sadistic tendencies. The dual-identity nature of the Apache Kid (a white boy raised by Apaches after his family was slaughtered only to witness the slaughter of his adoptive family by whites) is also a call out to the way the film plays with its many dualities: cop/killer, villain/hero, adult/child, etc. Both director Cronenberg and Stephen King, the original author of The Dead Zone, were fans of comic books as kids, and Cronenberg has talked about his childhood obsessions, including "E.C. Comics, scary and bizarre and violent and nasty—the ones your mother didn’t want you to have." 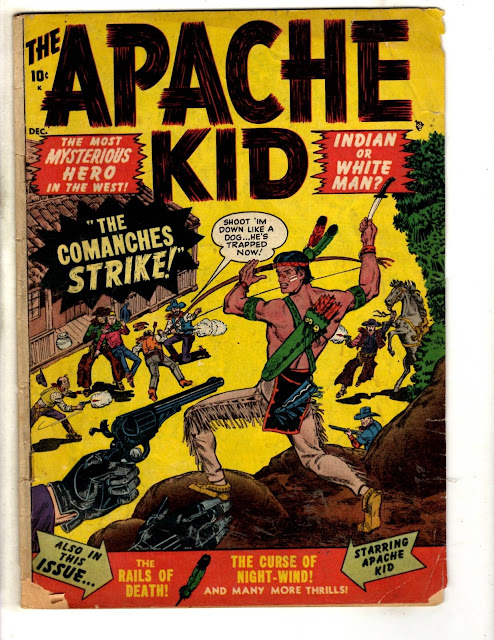