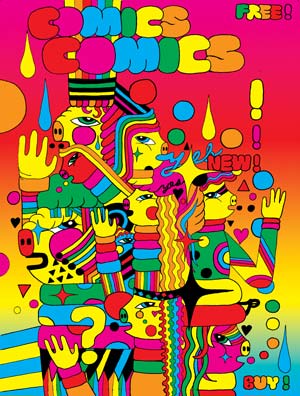 Wow, Dan Nadel and Timothy Hodler have a blog and are putting out a FREE magazine about comics that should bring the artcrit and design sensibility seen in the Ganzfeld to an exclusively comics environ. Nadel seems to have a very unique (to comics criticism, anyway) take on art and his editorial style (basically: "this ugly drawing is comics --deal with it") is refreshing.

The blog is mostly a way to hype publishing efforts like PictureBox, Lime Publishing, and Nadel's Art Out of Time, but also has reviews (like a feature on Carl Barks) and excerpts from the new Comics Comics mag.

Hodler's essay on Barks has some interesting points. He argues that "His sense of space is outstanding" and that "this isn't complicated, theoretical stuff that needs a lot of explication to understand, anyway. In some ways, Barks' place in comics is similar to Robert Louis Stevenson's in English literature. They're both so masterful that sometimes they're taken for granted, their contributions to our culture overlooked or dismissed as children's stories."

I like those old Barks comics as well, but find it hard sometimes to get past the weirdness of the Disney brand (not to mention the weirdness of the animal conceit that the Air Pirates and Mad's "Mickey Rodent" had such fun with). Barks did manage some interesting social satire and his storytelling and dialogue are very sharp, but Robert Louis Stevenson? Maybe it's just because one of my old perfessors was an editor of the Complete RLS, but I don't see the complexity of plot or theme in the decidedly adult work of Stevenson mirrored in Barks. Now when we compare Stevenson's drawing to Barks...

Comics Comics
Posted by BK at 2:47 AM

Email ThisBlogThis!Share to TwitterShare to FacebookShare to Pinterest
Labels: blogs