(not quite a) Graphic Novel Review: Nog a Dod 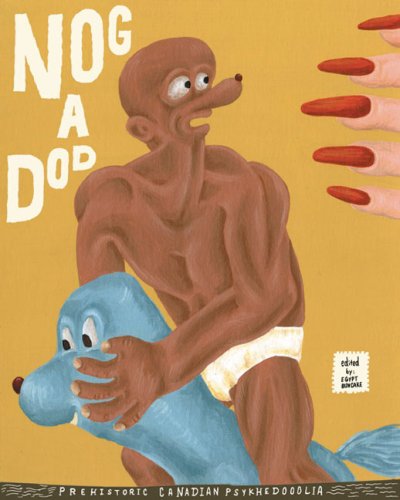 1. "A renovated sandwich takes your eyebrows to tuba practice."

Nog a Dog is something of an artistic manifesto for a group of friends who have been sharing their art back-and-forth in zine form over the past decade or so. According to editor and contributor Marc Bell, the book is a "filtering down" of work created "by a loosely affiliated group of Canadian artists." It's quite a work of conservation, since many of the booklets collected in this squarebound trade paperback were originally printed in very small quantities and were often disassembled and recombined by their intended audience.

2. "S/he turned up to fight crime with washroom keys." 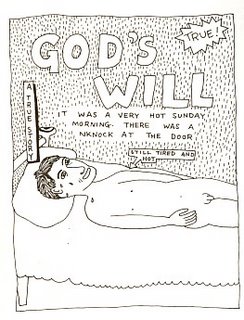 Reading the book --a bewildering array of photo-montage, piggy-back art, doodles, word games, anti-narrative comics and paintings-- I get the feeling that I'm eavesdropping on a cultish jam-session whose members share a secret surrealist language of in-jokes and myths. But far from being the proverbial turn-off , the good-natured lame-ass clubbiness of the work serves as something of a doorway to a particular way of seeing.

The book collects large chunks of material from over 40 zines --some in full colour but many in black and white. Having all of these books crammed together, living under one roof as it were, is something of a godsend --accumulating something that I would never otherwise see until some museum retrospective is published 20 years from now and all the energy of this art has dissipated. Even back when I was regularly ordering things through the pages of the old Factsheet 5 or Broken Pencil I often shied away from tiny drawing zines and artist's books in favour of comics. After all, I reasoned, 10 pages of stapled-together drawings is a poor substitute for ten pages of stapled together narrative. Now that the lines between comics and the gallery seem more blurred to me, I'm just overwhelmed and intimidated by the volume of work out there and fear it's impossible to keep track of these artists without some kind of guide. Luckily Bell has stepped in to try to organize a bit of the exuberance and put faces to names (or names to drawings). Many of the contributors will be familiar to readers of contemporary art comics: Marc Bell and frequent collaborators Jason McLean & Peter Thompson, Keith Jones, etc. Most I was unfamiliar with before this volume. Among the revelations for me were the dark dreamscapes of Jonathen Petersen whose drawing style here is sort of like Mark Beyer meets Yellow Submarine. As well, the chubby sketches of Amy Lockhart, who also provides the book's gorgeous cover, are comforting and disturbing at the same time.

4. "Personal obsession is the crowning glory of life." 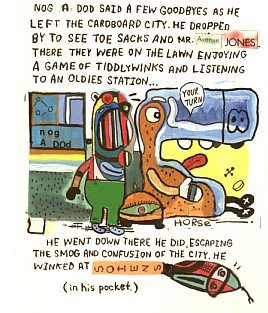 There are comic strip-type stories here, notably by Keith Jones and Mark Connery, but I'm not sure I prefer these more orderly sequential drawings to the anarchy that the majority of the book represents. There's something else that is harder to pin down going on here, something that the wonderful world of sequential art in all its glory is not sufficient to express. Although in turns beautiful and baffling, repeated journeys through the book reveal a sort of meta-narrative at work, documenting the process better than Bell's sometimes confusing attempt at collation. The collection tells the story of how these artists have interacted, developing weird tropes, recurrent characters, and their own drawing chops over the course of this "project." Above all, the book says "Don't just sit there, draw something! Transform the raw materials of your world's monoculture --restaurant reviews, newscasters, JFK, Stephen Harper, The Lord of the Rings-- into something representing your own worldview."