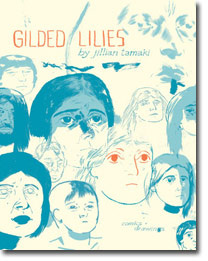 I find it a source of daily amazement that beautifully packaged collections of comics are being published with such regular frequency. The latest exhibit is this little squarebond trade from Conundrum Press collecting some early comics narratives and drawings from cartoonist and illustrator Jillian Tamaki. The restraint and tastefulness of the book design, including the subdued blues and oranges of the cover, is really very pretty and makes me wish that everything on my bookshelves could look this good.

Tamaki is a Canadian cartoonist currently living in Brooklyn, NY. Her illustration work has appeared in prestige U.S. magazines as well as in places like The Walrus here in Canada. Along with her cousin Mariko Tamaki, she won an Honourary Mention from last year's Wright Awards jury for the comic book Skim, which is currently being expanded into a full graphic novel for House of Anansi Press.

Gilded Lilies features two longer solo strips by Jillian. The first is a 21-page rumination on post-Wayne Gretzky Edmonton called City of Champions. The second is the 76-page silent and dreamlike The Tape Mines. City of Champions is made up of a series of vignettes: quotidian scenes of Edmonton residents and their environment in the wake of Gretzky's departure from the Edmonton Oilers hockey franchise for the glamour and big money of Los Angeles in 1988. At first glance the Gretzky trade is a slightly weird premise for an artistic investigation into the character of a city but the short history that Tamaki sketches in the first few pages of the strip is deft and stikes just the right note of loss tinged with humour. A montage documenting the trade and its immediate real-world effects (Edmonton Oilers' owner Peter Pocklington being burned in effigy, newspaper headlines, crying children) is contrasted with a short text piece:

"Canadians are cautious optimists. We are suspicious when things seem too good to be true. There's stuff we percieve to be sacred --untouchable-- of course, nothing is. However, resigned cynicism is prt of our charm. And probably, just as Canadian anyway. Or whatever."

This is followed by scenes of ordinary people going about their daily routines, either with determined resignation or total obliviousness to the world of sports titans, politicians, and millionaires. It's hard to say, really. What is evident is Tamaki's ability to capture ambiguity and the feeling of urban space --street people, kids at play-- in a few strokes of her pen, conveying her own experience as a student in Alberta through tiny sketches.

The Tape Mines is a more complex narrative that charts the journey of a pair of youngsters through a surrealist, Alice-in-Wonderland-style series of adventures. Told entirely without words, the tale unscrolls organically, mostly without benefit of panel borders or any indication of time of place. The two young protagonists begin the story working as child labour, manually rewinding cassette tapes in an eerie forest "factory", but a series of increasingly bizarre events and transformations soon elevates their adventure into a modern Grimm's fairy tale. Tamaki's drawing style, utilizing slanting sloping figures akin to handwriting, propels the narrative forward without being too showy. A self-confessed student of George Grosz, Tamaki's sometimes grotesque figures, rendered in brush and pen with large areas of black and grey washes, have a generalized sadness about them that is compelling as well as spooky.

Taken as a whole, Gilded Lilies is a beautiful introduction to Tamaki's art, including early work and reflections on childhood, providing insight into the world of a self-possessed cartoonist that we can expect great things from.

-Tamaki interview at Illustration Friday, including a photo of the artist at work on a comic