Wow, less than a week after the amazing news that the Siegel estate has regained the Superman copyright comes the sad news that cartoonist Jim Mooney, one of the last remaining artists of the classic Superman Family stories, has died. Mooney died on Sunday, March 30, according to this obit by Mark Evanier.

Mooney was best known for his long association with Supergirl --he illustrated her adventures from roughly 1959 to 1969. Along the way, he was also responsible for delineating many of the most fondly-remembered adventures of the Legion of Superheroes. In the 1970s, Mooney moved to Marvel and worked on Spider-Man, Ms. Marvel, and, most famously, Steve Gerber's Man-Thing and Omega the Unknown.

Mooney's Supergirl art developed into a perfect match for the character, with soft lines and many feminine details --like the trademark long eyelashes and frilled skirt he added to the character. At DC, Mooney usually inked his own pencils, controlling every aspect of the finished art. (In contrast, Mooney would usually work either as a penciller or inker when at Marvel, finishing pencils by Romita or John Buscema and being inked by Frank Giacoia). 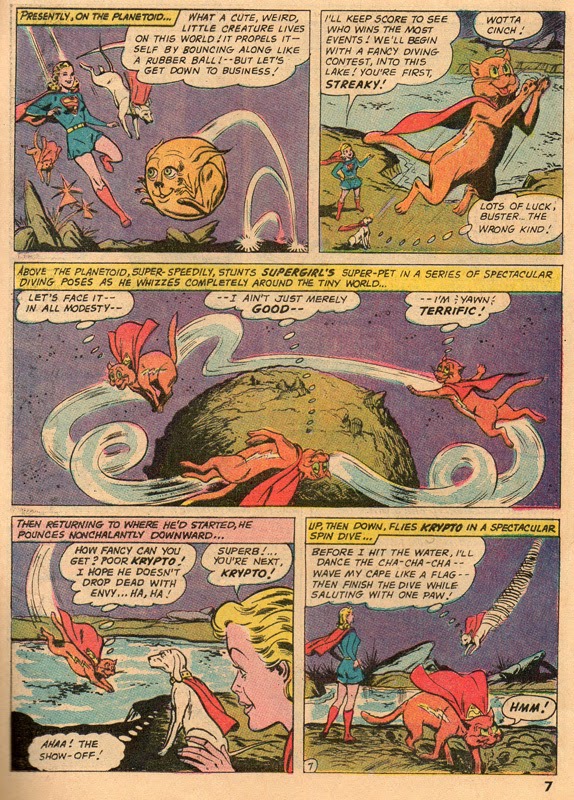 Before he landed the Supergirl gig, Mooney had drawn humour, girl and funny animal comics, eventually moving on to adventure comics including ghosting Dick Sprang on Batman and illustrating Tommy Tomorrow and Dial H for Hero. His style on Supergirl is in strong contrast to the other Superman artists of the period. These artists (Curt Swan, Al Plastino) preferred muscular, dynamic figures and slick inking. Even Mooney's closest parallel, Lois Lane artist Kurt Schaffenberger, had a slick style with more in common with strip cartoonists like Alex Raymond and Mandrake the Magician's Phil Davis. Mooney's female figures are delicate and his teenagers look like teenagers, not smaller versions of adults. He also had an eye for the humourous, and was responsible for some great goofy aliens and one of the most memorable aspects of the Supergirl strip, Streaky the Super-Cat. According to an 2005 Daniel Best interview printed in TwoMorrows' Krypton Companion, "Streaky the Super-Cat was my design. I think the writer came up with initial idea, but I designed him so he looked a bit more like an animated cat. I fell in love with Streaky from the very beginning. I still draw him. I love cats. But instead of the editor telling me, 'Make him look like this.' or 'Look like that,' I pretty much drew him my own way." 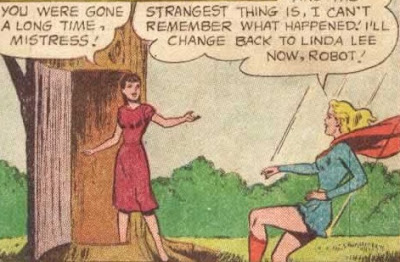 Mooney's cartoon realism blend was the perfect fit for the Supergirl series. While not of the order of Ogden Whitney's bizarre, frozen art style, Mooney compositions and figures often had an underwhelming, pedestrian edge, in keeping with the sometimes low-key adventures of Supergirl. The off-putting, melodramatic premise of the series, that the orphan Supergirl is kept as a secret weapon by Superman, forced to live in an orphanage until she masters her superpowers and can be revealed to the world, resulted in many stories that merely retread ground already covered by Superman and the Smallville-bound Superboy. Thus, like Superman, Supergirl is tested by the Legion of Superheroes and has a mer- love interest. She wears a wig and uses a loyal robot double, stored in a hollow tree until needed (surely, one of the saddest aspects of any comic book ever!). Many of Supergirl's Midvale adventures revolve around the world of highschool and high-school romance. Mindful of the intended female audience for the character, the writers along with editor Mort Weisinger, found many opportunities to threaten Supergirl with marriage to strange aliens or have her develop crushes on cowboys who are really magic flying horses transformed from ancient Greek centaurs.

Conversely, Mooney was responsible for some interesting science fiction imagery and was adept at fanciful costume design --he drew hundreds of costumes for both the Legion of Superheroes feature and the Dial H for Hero back-up. Mooney is responsible for the look of many popular Legion characters including Chameleon Boy, Invisible Kid, Colossal Boy, Triplicate Girl, Phantom Girl, Brainiac 5, Shrinking Violet, Sun Boy, and Bouncing Boy.

Mooney's characters were capable of expressing a broad range of emotion. While the plots of many Supergirl stories often resembled those of romance comics, the fear, sadness and love that the characters expressed facially and the approach to body language, ranging from delicate hand gestures to slapstick double-takes, were unique to comics. On an average page, Supergirl/Linda Lee was likely to move from wide-eyed excitement to creased-brow worry to blissful dreaming to eager determination.

These are some of my favourite children's comics, a beautiful body of work created by Jim Mooney, a skilled, professional artist, who worked in tandem with great writers like Otto Binder and Superman's co-creator, Jerry Siegel.

-----
A gallery of Supergirl commissions by Mooney.

The origin of Streaky.

A gallery of Mooney covers. 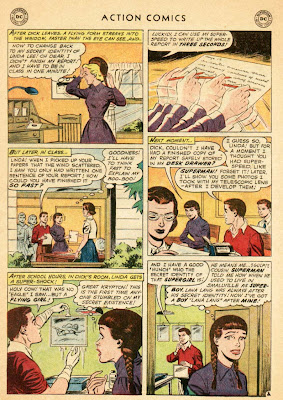 Thanks for this beautiful tribute to our friend, Jim Mooney.

My husband Mark and I have been friends with Jim and Anne Mooney for many years, he has not been himself since her passing.

He was such a great human being, enormously talented and kind. We will miss him terribly.

Thanks Melissa. I find the stories Jim drew very comforting.

I too, Bryan, thank you for your kind tribute to Jim. I have been a friend of Jim and Anne Mooney for may years, as my now 80 year old step-mother and Anne were best friends and business partners for years.

Jim's work spanned seven decades and is an amazing body of comic art. I own some fabulous commissions and original page art that I highly cherish, but most of all I remember the personal conversations over diner and his amazing insight, humor and sensitivity.

We all miss him and Anne greatly.