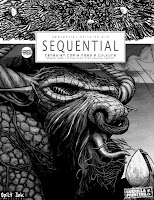 I'm very pleased to report that the first issue of the print version of Sequential will be available for free at the Toronto Comics Art Festival this weekend.

Sequential is the daily newsblog about Canadian comics that I contribute to. It has been online since 2002 but for TCAF this year we decided to create a print edition that captures in physical, 3-dimensional form the essence of what we do on a daily basis with the blog. To this end, we enlisted the aid of several cartoonists and writers whose stories and art we have covered and linked to over the years, and the result is a 22-page magazine full of comics, reviews, interviews, and features about every aspect of comics and graphic novels in Canada.

The mag features a cover and a graphic-novel preview by Sequential editor/publisher Max Douglas (aka Salgood Sam), who also worked tirelessly recruiting and riding herd on talent, fielding story-pitches, selling advertising, dealing with the printer, writing, and laying the whole issue out solo. There are also articles by Robin Fisher, Jamie Coville, Jim Munroe, Brad Mackay, Robert Pincombe, and yours truly. As well, there are comics by John Martz, Fiona Smythe, Sean Ward, Dan Zabbal, Willow Dawson, and Mahendra Singh. We cover old strips, new strips, webcomics, bande-dessinee, and everything in-between. And I have to say, the thing looks pretty damn sharp.

Canadian comics is a dynamic culture of wonderful art, artists, writers, readers and publishers (not to mention all the various craftspeople, printers, cosplayers, retailers, and whatever-the-hell Herve St.-Louis is), and we like to think this new incarnation of Sequential captures just a little bit of that magic.

The magazine will be distributed for no charge at TCAF and hopefully will serve as something of a guide to some of the people and events of the weekend. Please drop by and check out the issue and maybe say hi to some of the contributors. I hope to see you there!
Posted by BK at 5:00 AM