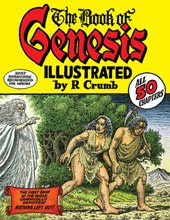 Following hot on the heels of Taschen's massive Crumb Sex book, comes news (via Tom Spurgeon) of a signed, limited edition of Crumb's new Genesis book, available from his publisher WW Norton. The special edition retails for $390 Canadian. Even if the suggested retail price is $625, the book is still no match for the reigning champ, the $1000 slipcased Gary Panter book I wrote about earlier.

I read a preview of Crumb's Genesis in the New Yorker last week. His retelling of the Garden of Eden story was about what I expected: a gorgeous, meticulously-rendered and masterful word-for-word adaptation of the Bible story. The story has the standard Crumb sexiness (how could it not?) but doesn't seem to have that extra touch of depth that a less-literal version might have. Chester Brown's Gospel adaptations are a case in point. They are weird and off-model enough that they actually make you think about the intellectual content of the time-worn source material. Likewise, Basil Wolverton's illustrated Bible is so weird and passionate that it approaches from a distance a sort of Blakeian artistry. Of course, Genesis is a fucking weird, schizophrenic book to begin with, and Crumb's crystal translation only makes this more obvious. Crumb doesn't have to add anything. Plus, his Eve is hot.

Email ThisBlogThis!Share to TwitterShare to FacebookShare to Pinterest
Labels: graphic novels, most expensive