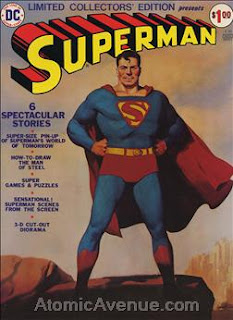 I knew this was a story I had to link to thru Mystery Hoard because it has Superman and Mystery in its title. It's about a Superman painting in a library which is the original for the giant Superman treasury from the 70s.

It turns out the painting is the

first official full-length portrait of Superman, commissioned to promote the Superman radio show that went on the air in 1940 — an image for a medium you cannot see.

The painting’s provenance was a surprise to officials at Lehman College, in Bedford Park, the Bronx.

“I don’t think any of us realized what it was,” said Janet Munch, the reference librarian and college historian. “We knew who it was.”

It all began as Mr. Saunders prepared a biography of the illustrator who painted it, H.J. Ward, who had studied with the prolific painter N.C. Wyeth and also created portraits of the Lone Ranger and the Green Hornet. Mr. Saunders knew about the Superman painting because it had been reproduced on Page 45 of “Superman: The Complete History, the Life and Times of the Man of Steel” (Chronicle, 1998). But where was the painting itself?

The author of the book, Les Daniels, said last week that it was not in DC Comics’ offices when he was working on the book. “We used a photograph,” he said.

Martin Pasko, an author of “The Essential Superman Encyclopedia,” which will be published by Del Rey in August, was puzzled.