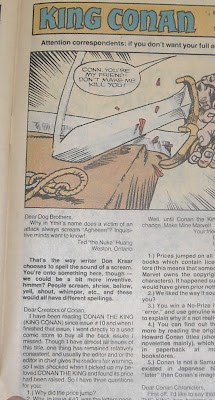 The letter is written by Ted Huang of Weston Ontario. Ted asks the immortal question, "Why in Ymir's name does the victim of an attack always scream "Agheeee"?

Invoking the Frost Giant's name, Ted (Teddy? Theodore?) aka Ted "The Nuke" Huang, makes a good point, based on a close reading of previous Conan issues. The funny thing is, in the very same issue, we have the slightly-modified version of the same victim squeal:

And of course, as usual, the editors got it wrong. The correct response is:

Boycott Marvel! Occupy Conan!
Posted by BK at 11:31 AM