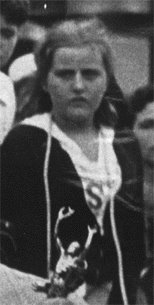 In my continuing effort to document cool things on the web about classic Superman comics --among the greatest and weirdest childrens literature of the 20th Century-- a few links to recent discoveries.

The continuing archival research into the first Superboy and the 1940 New York World's Fair "Superman Day" continues at the Superman Through The Ages website with newly scanned photos of the participants (mentioned previously here).

The latest thing is a discussion of a figure in the background of one of the photos, a young girl with a homemade "S" crest on top of what could be a Supergirl costume. The first fan costume parade?

Superman Through the Ages! Forum - The Very First Super Boy!

Another great find is this old ad for a Superman costume --dating back to 1954. Jared Bond has a website called The Speeding Bullet that is all about the Superman comic strip and lately he's been digging up newspaper articles and ads from the classic period (the best is a newspaper article about Joe Shuster getting arrested for trying to steal a car in Florida in 1940). 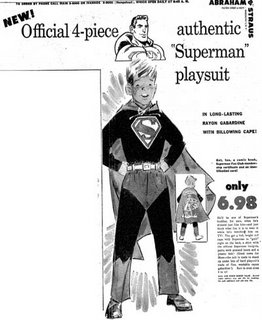 Lastly, there was a great series of interviews on the U.S. public radio show Studio 360 about Superman as an American icon. Gerard Jones talked about the life of Jerry and Joe, mostly reiterating points from his Men of Tommorrow bio but also making reference to Siegel's early intentions for Superman and Lois (hinted at in the aborted "K Metal" storyline). Jones mentions that Siegel wanted Superman to marry so he could write a "Nick and Nora Charles"-style series. Interesting, because this is what happened in one of my favourite 1970s kids comics, the Mr. and Mrs. Superman stories. Most of these stories, which take place in an alternate reality on a world called Earth-2, where written by uber-fan E. Nelson Bridwell and drawn by Kurt Schaffenberger in his clunky, charmingly old-fashioned (for the 1970s) style. In the stories, Lois helps her husband solve crimes while trying to set up house as newlyweds who also work together at the Daily Star. Sort of The Front Page meets The Thin Man, in tights.

The radio show also includes quotes from Jules Feiffer on Siegel ("a charming, lovely man") and Siegel and Shuster ("they got screwed"). Art Spiegelman has a few choice quotes, too ("there was only room for so many Chagalls" & "Superman is Jewish the way Clark Kent is Jewish").
Posted by BK at 6:12 PM