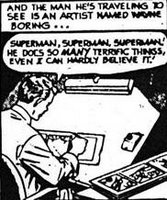 Wayne Boring is one of the most iconic artists to ever work on the classic Superman comics. Starting as a member of the Shuster studio, he soon became the primary Superman artist for National/DC and drew the daily comic strip for many years.

His influence has been far-reaching --his clunky, wide-shouldered version of Superman has been appropriated in parody and pop art and he has been the inspiration for a modern graphic novel classic --Dan Clowes' David Boring, about a young man who obsesses about his missing father, an obscure comic book artist.

Wayne Boring drew himself into a Superman adventure back in 1951. In the story, Superman wrecks Boring's studio to prove he is the real McCoy to a writer. These strips are not well-known today --we have the Speeding Bullet website to thank for digging them up:

Speeding Bullet
Posted by BK at 2:58 AM

Glad you liked the site. The episode with Wayne Boring was a blast to read :) - Jared Bond @ The Speeding Bullet

Loved it --thanks Jared!