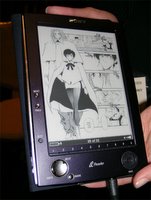 The much-hyped Sony Reader portable ebook has had its release date delayed once again, eliciting groans from tech reporters and gadget lovers the world over. Not that anyone is really acting surprised. The new toy has had tons of critics since it was first announced. Many industry watchers continue to be sceptical of the proprietary nature of Sony's copy-protection software.

The ebook is Sony's followup to the Librie, the last launch to meet with a mediocre reception.

Many U.S. publishers, including manga giant Tokyopop, have already signed on as content-providers but it looks like graphic novel fans will have to wait awhile longer for the privelege of not trading electronic comics they purchase from Sony.

Sony's such a tease CNET News.com
Posted by BK at 6:11 AM

Email ThisBlogThis!Share to TwitterShare to FacebookShare to Pinterest
Labels: tech