The Music of Jack Kirby 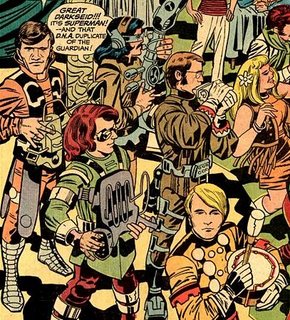 I've not really thought about what Jack Kirby's comics would sound like when set to music, and aside from the theme songs and music that accompanied various Marvel Comics animated cartoon adaptations from the 1960s and 70s, and various references in pop music, I've never heard any musical attempts to interpret the spirit of Kirby's art.

The Kirby Quartet, on the other hand, have developed an entire repertoire of music that they claim has "the same energy and passion" that Kirby brought to his drawing. Based in Toronto, the group is currently touring the West Coast with an upcoming stop August 8 and 9 in Vancouver for "two concerts to raise funds for First United Church Mission in Vancouver’s Downtown Eastside." (info 604-736-6926)

Kirby Quartet Home Page
Posted by BK at 1:53 AM