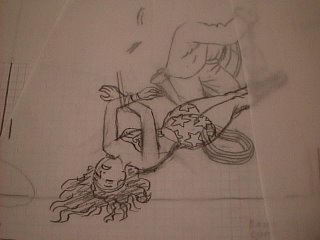 Another fundraiser for the Wright Awards.

This time around, it's Chester Brown's original pencils for the Wonder Woman page he donated for the previous auction last summer. It's a fascinating view of his working methods. The difference between these loosely assembled drawings and the finished art sold earlier is striking (Chester's pencils are pretty tight but I think he still edits when he inks --Wonder Woman's ass looks rounder in one of his pencils).

Chester uses many smaller pencil drawings to compose a page. He draws each panel --and sometimes each figure in each panel-- separately. He does the same thing for all of his lettering and word balloons. He then lays all of the separate pages into the order they are supposed to read in, places a piece of paper on top, and traces over them onto his final art with a brush. He documented this process in his short story "Showing Helder" in an early issue of his comic book series Yummy Fur.

Anyway, the Wonder Woman drawings are now being auctioned off on ebay:

The organizers of The Doug Wright Awards for Canadian Cartooning are delighted to announce their third fundraising auction: a one-of-a-kind piece of original art by groundbreaking Canadian cartoonist Chester Brown.

Considered a pioneer of the 1980s alternative comic renaissance, and undeniably one of the form’s most original and refreshing talents, Toronto's Chester Brown agreed to lend his distinctive style to the superhero genre as a gesture of support to the Wright Awards. The result was a stunning interpretation of the comics' first female superhero: the Amazonian princess known as Wonder Woman. Inspired by a page from one of Wonder Woman's earliest appearances, these drawing are the Original Pencils used in the creation of the artwork from our last auction. These pencils provide a rare glimpse into Chester's creative process. By looking at these pencil drawings, you can follow Chester as he composes a page of original art, from rough sketches to word balloons. There are over thirty individual drawings included in this auction, each averaging approx 6" x 4"!

This artwork marks the Montreal-born artist’s first-ever piece of superhero art ever - a fact that makes it both historically significant, and a guaranteed collector’s item.

The Wright Awards were established in 2005 to recognize and spotlight the wide array of talented cartoonists working across Canada. The premiere award event recognizing the art of graphic novels and comics, The Wrights are named in honour of Doug Wright (1917-1983) whose humourous strip Doug Wright's Family graced newspapers and magazines across Canada for nearly 35 years.

Chester Brown is one of the pioneers of the 1980s comic renaissance and one of the art form’s most acclaimed talents. He began self-publishing his critically regarded comic-book series Yummy Fur in 1983. In it, Brown serialized his first four graphic novels: Ed the Happy Clown (1989), The Playboy (1992), I Never Liked You (1994), and The Little Man (1998). His Louis Riel was published as a graphic novel in 2003 and was the first graphic novel to make it to the Canadian national bestseller list as well as bestseller lists worldwide

All proceeds will benefit the 2007 edition of The Doug Wright Awards for Canadian Cartooning, which will be handed out next year in Toronto.

Email ThisBlogThis!Share to TwitterShare to FacebookShare to Pinterest
Labels: hype