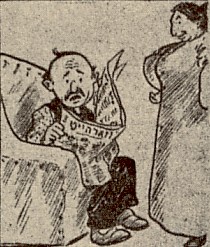 Look at him, how he sits there and reads baby stories.


Rooting around in the files...

Samuel Zagat (1890-1964) was a cartoonist and photographer, part of a small group of left-wing Jewish artists who flourished in the socialist press in the early part of the 20th Century. I had never heard of him before I found this cartoon in a disintegrating book about the New York Jewish immigrant experience a few years ago.

Zagat drew a strip called "Gimple Beinish" (1912-19) for the Yiddish daily Warheit /Varhayt in New York. He was also an editorial cartoonist for the Daily Forward. A book of his drawings was published in 1972.

The strip here, featuring Hanne Pessl, was originally in Yiddish and reads right to left. 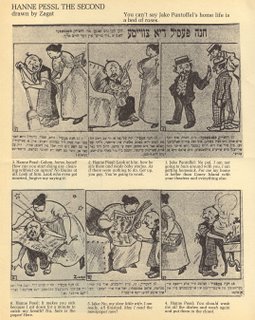