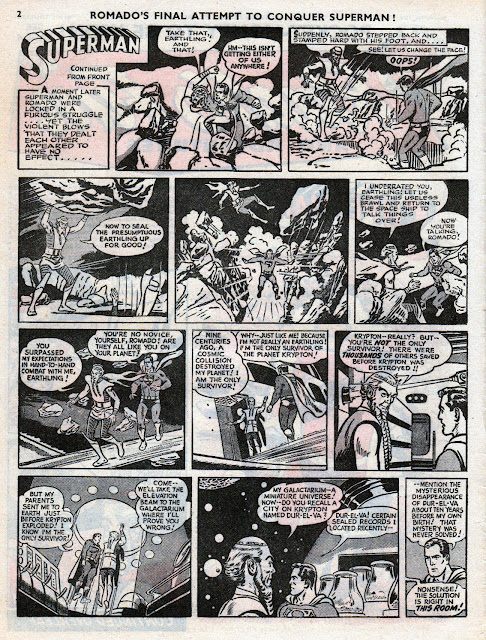 It's not exactly Fletcher Hanks, but the old Superman comics make for fun and often bizarre reading. I have a small Mystery Hoard of Superman Sunday pages from the Toronto Star that are precious to me and I've also recently discovered the treasures to be found in the old Superman dailies. These old strips have great early art by the likes of Shuster, Curt Swan, and the sublime Wayne Boring, not to mention interesting scripts from the proudly-Canadian Alvin Schwartz.

I've linked to Jared Bond's wonderful Speeding Bullet site before --he's collecting all of the Superman newspaper comic strips online and often finds very interesting things. The strip was occasionally used as a testing ground for ideas that were later used to better or more memorable effect in the comic book. The first bald Lex Luthor and the first telephone booth costume change, for example, happened in the comic strips. Most of these strips have never been reprinted (there are two nice book collections of daily and Sunday strips dating from 1939 up to 1943, but nothing later is currently available). Most of these events are not documented anywhere (including most standard fan histories, Overstreet, etc).

The latest at Speeding Bullet? As Bond notes on a Superman discussion forum, he has uncovered several new "firsts" from 1958:


1) Brainiac
In April 1958 a storyline began involving an alien named Romado, who is clearly a prototype for Brainiac, who would first appear in Action Comics #242 (July 1958). Romado has a computer-enhanced mind, and collects miniature cities in bottles from around the galaxy. He has the shrunken Kryptonian city of Dur-el-va, which he traps Superman in.

2) Bizarro
Bizarro appears in the strips in September of 1958. Though Superboy #68 (cover date of October 1958) hit the stands earlier, this story was actually written first. In this early version, Bizarro has a "B" on his chest. What is creepy is that Superman convinces Lois to betray Bizarro and trick him into getting exposed to his version of kryptonite, which "kills" him. (Though as Superman says, how can you kill a shadow...)

3) Metallo
December 15, 1958 begins a new story of Professor Vale saving a patient from a horrible accident, and having to put in a mechanical heart, etc. to save him. He is powered by uranium pellets, with the possibility of some other rare mineral....I haven't read much of the story yet, as the year ends, but it is clearly the first Metallo story. This is winter 1958. In the comics, he first appears in Action Comics #252 (May 1959)

This is a super-epiphany sir! I had no idea the place those newspaper strips had in the pantheon of Superman continuity...it's like it was DC's farm team: a place for writers to test out ideas, some of which were "called up" to the big leagues. I wonder if the saem holds true for the old Spider-Man strips?

Would love to see Bizarro's "B" emblem instead of the usual reversed "S" for a change.