"Why even bother drawing Supergirl in such a way that a discussion of her underwear wearing habits is even necessary?" 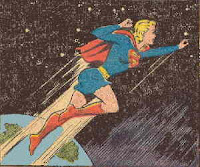 I guess this is where I say modern superhero comics suck and are mostly ugly.

Gary Panter's art is ugly but is also beautiful.

The title quote comes from comments on this old blog. I am grateful to the Publishers Weekly comics blog, The Beat, written by the venerable Heidi MacDonald, for her 63 comment-generating, quizzical post about a recent comic book cover featuring the Supergirl character. The character is featured in one panel within the comic in question. The panel also features the welcome return of Streaky, the Super-Cat. It's no Jim Mooney classic, but it will do. I'm still baffled by the post (and I even read the comic in question --which does not feature underwear, you may be glad to know).

Well, at least people are talking about something important, instead of the Wright Awards.
Posted by BK at 10:58 PM