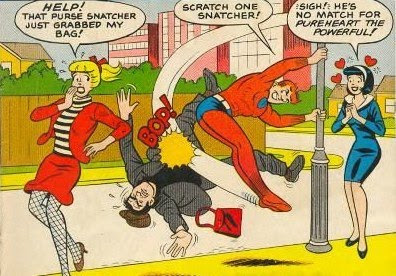 3 Superhero Comics That Were Better Than the Watchmen Movie

It should come as no surprise that I felt the best part of the recent Watchmen movie was the ending. Specifically, the choice of music played over the closing credits: Leonard Cohen's "First We Take Manhattan." No other song could be so fitting. An ironic, apocalyptic song-poem droned by Cohen over a cheezy, 1980s synth-pop track, the piece perfectly sums up the contradictory impulses at work in the horrible film that preceded it. Serving as a nod both to the conspiratorial nature of the film's plot and to the centrality of the ubermensch Dr. Manhattan character, the song's opening lines, "They sentenced me to twenty years of boredom...," perfectly sum up my feelings after sitting through the seemingly interminable movie.

The best part of the recent Watchmen hoopla and hype is that it has re-opened the critical debate on the comic book source material of the movie. Stalwart soldiers for the cause of comic art, like Jeet Heer, take a stance against all superhero comics that are not straight parodies or fun kids' stuff. Others, like cartoonist-critic Frank Santoro, say you have to be a true-believer to even begin to understand where Alan Moore is coming from. Somewhere in the vast middle is Tom Spurgeon who, while he pans the film, still finds several interesting approaches to enjoying the graphic novel.

There is no denying the graphic novel is interesting, a workmanlike, well-crafted, intricately plotted story packed-full of stimulating and often funny ideas about superheroes and politics, but it is essentially a failed masterpiece the parts of which never really cohere in any significant way. A great gaudy graphically complex book, Watchmen nevertheless suffers from Dave Gibbons stiff figure drawing and Moore's shallow characterizations, unbelievable plot, and ambiguous relationship to the material.

In truth, it is extremely hard to take superhero adventures seriously, let alone craft aesthetically sophisticated versions of them for adults. The most successful contemporary examples of mass-market superhero comics seem to straddle a fine line between slick genre exercises that meld aspects of crime fiction to superhero fantasy and utter fannish dreck that would have been rejected by producers of 1970s Saturday morning cartoons. There is only so much metaphor and thematic density a rickety genre about magic boyscouts in circus costumes can support.

For your consideration, another group of superhero-related comics that attempt to do something with the genre, inspired by Sean Rogers' recent Watchmen "Corrective":

Originally appearing in 1960s underground press forums like the East Village Other and in Spain's own Subvert comic book series, Trashman answers the question nobody asked, "What if Jack Kirby's Sgt. Fury was a horny Marxist from the future?" Spain re-imagines the traditional superhero story from the point of view of a working-class leftist militant confronted with creeping political fascism and corporate capitalism, confronting it with paranoid drug-influenced page layouts and plotting, clunky post-Kirby figure drawing, heavy black inks, and trippy sloganeering and self-referentiality, all set in a fantasy of revolutionary sex and violence. Trashman is really a prole named Harry Barnes who is recruited and trained by the Sixth International to fight the cops and defend the workers. Trashman has several paranormal senses and the ability to change his shape at will, but he mostly likes to shoot people with machine guns in the service of a disjointed narrative --sort of OMAC meets Che Guevera. The Trashman comics are beautiful and funny love letters to a revolutionary ideal.


2. Archie as Pureheart by various

(available in 2010 as Archie: Pureheart the Powerful form IDW)

As explained here, the Archie team decided to simultaneously cash in and parody the craze in superhero comics spurred by the 1960s Stan Lee/Jack Kirby/Steve Ditko revolution at Marvel and the revitalization of Silver Age superhero products at DC by penning a series of adventures starring the Riverdale gang as a group of superheroes, with lots of tongue-in-cheek fun and beautiful fluid clean cartooning. It's a self-aware kids comics that's not afraid to take a numbskull premise and run with it, without looking back, and without making a career of it. The result reads like a combination of classic MAD superhero parodies ("Superduperman," et al), Ditko and Lee's Spider-Man, and Otto Binder and CC Beck's Captain Marvel/Shazam comics of the 40s and 50s. The sort of superhero comics that Jaime Hernandez would do, minus the sex and punk rock (but still with lots of fishnet stockings and people hitting each other with their butts).

Ware's searing masterpiece puts Watchmen to shame with its ironic distance, convolutions and diagrammatic precision. A reflection on mortality, failure, family, childhood, and an obsession with superheroes, Jimmy Corrigan is a graphic novel that treats the godlike nature of our heroes with a probing wit and academic artistic scalpel. The fact that both almighty god and a washed-up Steve Reeves-style actor appear as a Superman figure is just a bonus. Did any comic do more for and to the genre of superheroes than Jimmy Corrigan? As Peter Schjeldahl wrote for The New Yorker, "Reading 'Jimmy Corrigan' is like operating an intricate machine whose function is not immediately apparent. Gradually, meanings emerge and emotions crystallize. None gladden." The doom that comes to Jimmy is ultimately more banal and overpoweringly wonderful than the boredom of Dr. Manhattan's demise and resurrection.