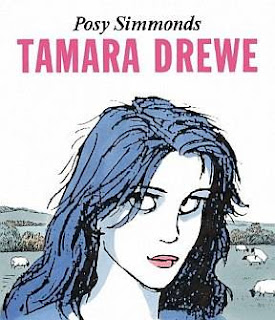 
Posy Simmonds draws the best cows of any living cartoonist and her ability is ably demonstrated in this pastoral farce that reads like Leah McClaren as drawn by Frank Thorne (or maybe David Lodge meets Colleen Doran?) --and is in reality an homage to Thomas Hardy's Far From the Madding Crowd (which was originally illustrated by another woman, Helen Paterson, way back in the 1800s). The book has a wonderful polyvocal narrative centred around the goings-on at a writers' retreat in the English countryside. The titular heroine, a zaftig columnist-turned-novelist, is the catalyst for a series of romantic and literary calamities that befall a small group of creative types forced into close quarters in the wide-open spaces. For a comic, Tamara Drewe has relatively large chunks of text, and the book feels very writer-ly, as befits its source, subject matter, episodic plot, and original serial publication, but it actually has a very tight structure built on a foundation of humour, beauty, and skilled storytelling.
Posted by BK at 1:35 AM