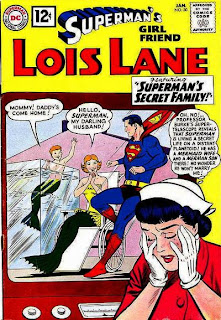 Some of the most poignant melodramatic aspects of the Superman family children's comics of the 1950s and 60s involve the Superman robots. Automaton slaves created by scientific genius Superman to act as his backup beards, and kept hidden in the closet when not in use, many classic stories relate the AI-like attempts at individuality and rebellion of these sad creatures. Superman kept his robots stashed away in his parents' basement, in a cave at the North Pole, in the closet of his apartment (whole Phds await!). Supergirl kept her robot double waiting patiently in the trunk of a tree, never sleeping, in those anxiously whimsical stories drawn by Jim Mooney.

The most recent robot tale I've read concerns Robot X-3. While training a new batch of robots (Superman trains his robots instead of programming them with essential information like, "don't let anyone see you change into Clark Kent"), Superman is turned invisible by red kryptonite and X-3 has to take his place and rescue some astronauts. X-3 gets lost in space and ends up on a tiny planet where he meets a stranded mermaid woman who reminds him of Superman's first girlfriend, Lori Lemaris. X-3 is such a hero-worshipper that, when the mermaid dies, he creates a robot mermaid family and builds a little house where he lives forever and happily ever after, kind of like The Little Prince meets Space Family Robinson, as illustrated by Kurt Schaffenberger .
Posted by BK at 2:10 AM