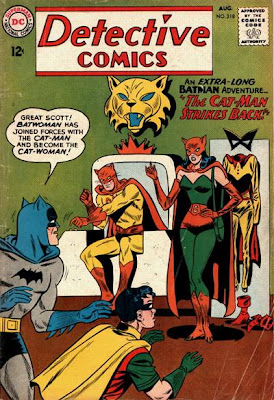 I love this cover. Sort of a Freudian dream image combining a child-like approach to lust and femininity with bold iconography. You can see why artists like Dan Clowes have made so much of Silver Age DC comics tropes. Background: Catman was a Batman villain who had a major crush on Batwoman (Kathy Kane) and fantasized about her wearing kinky costumes. Sort of a superhero (or supervillain) stalker. But he had a cool pad and liked cats, so he couldn't be all wrong. The Catman "epic" played out over a scattered trilogy of issues during the mid-60s.
Posted by BK at 2:14 AM