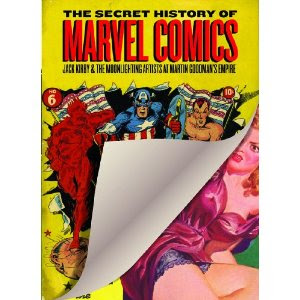 Kind of a Hanukkah gift. Fantagraphics is publishing The Secret History of the Marvel Universe: Jack Kirby and the Moonlighting Artists at Martin Goodman's Empire in 2012. The book is written by Canada's own Blake Bell and Golden Age Marvel scholar Dr. Michael J. Vassallo. Here is the blurb from Amazon:

The untold story of the House of Ideas.

Marvel Comics is home to such legendary super-heroes as Spider-Man, Hulk, Thor, Captain America, and Iron Man, all of whom have spun box office gold in the 21st century. But Marvel Comics has a secret history hidden in the shadows of these well-known franchises.

The Secret History of Marvel Comics digs back to the 1930s when Marvel Comics wasn't just a comic-book producing company. Marvel Comics owner Martin Goodman had tentacles into a publishing world that might have made that era’s conservative American parents lynch him on his front porch. Marvel was but a small part of Goodman’s publishing empire, which had begun years before he published his first comic book. Goodman mostly published lurid and sensationalistic story books (known as “pulps”) and magazines, featuring sexually-charged detective and romance short fiction, and celebrity gossip scandal sheets. And artists like Jack Kirby, who was producing Captain America for eight-year-olds, were simultaneously dipping their toes in both ponds.

These rare pieces of comic art, pulp and magazine history will open the door to Marvel Comics’ unseen history.

This is your seasonal reminder to Boycott Marvel! Happy Holidays everyone!
Posted by BK at 11:02 AM