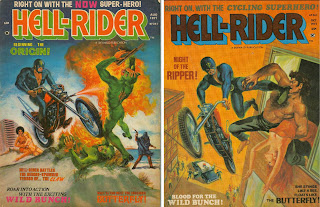 Sad news in New York City today as the creator of Ghost Rider Gary Friedrich lost his latest bid to reclaim the rights to the character from Marvel.

Friedrich created a character named Hell-Rider for Skywald in 1971 before taking the Ghost Rider idea to Marvel in 1972 with an assist from Roy Thomas and Mike Ploog. When the Nic Cage GR movie came out in 2007 crediting "Marvel" as the creator (how can an inhuman corporate entity "create" anything? Ask U.S. copyright law.), Friedrich sued for rights and compensation.

Friedrich is in a similar situation as the Kirby legacy since the matter revolves around a judge's interpretation of the work-for-hire law under which Friedrich was paid for the stories he wrote for Marvel comics. There is another Ghost Rider coming out in 2012 from Marvel Entertainment and it will be subject to the Marvel Boycott just like the upcoming Avengers film.

from the Associated Press story:


Comic book publisher Marvel Entertainment owns the rights to the Ghost Rider character in the fiery form that originated in the early 1970s, a federal judge ruled Wednesday as she rejected the claims of a former Marvel writer seeking to cash in on lucrative movie rights.

U.S. District Judge Katherine Forrest tossed out 4-year-old claims brought by Gary Friedrich, who said he created the motorcycle-driving Ghost Rider with the skeletal head that sometimes had fire blazing from it. A Ghost Rider of the 1950s and '60s was a Western character who rode a horse.

The judge said Friedrich gave up all ownership rights when he signed checks containing language relinquishing all rights to the predecessor companies of Marvel Entertainment LLC.

"The law is clear that when an individual endorses a check subject to a condition, he accepts that condition," the judge wrote.

Forrest said her finding made it unnecessary to "travel down the rabbit hole" to decide whether the character was created separate and apart from Marvel, whether the company hired Friedrich to create the character and whether he had thoughts about what rights he wanted to retain from the outset.

She said he also signed an agreement with Marvel in 1978 relinquishing rights in exchange for the possibility of additional future freelance work. He had worked for Marvel prior to that year as both an employee and as a freelance writer.