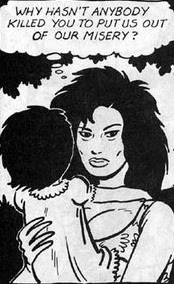 It's been a heady few weeks in Marvel Boycott land, ever since information about the supporters behind the U.S. online piracy bill were revealed. The Stop Online Piracy bill or the HR 3261 bill (also known as SOPA) is intended to give sweeping powers to law enforcement and copyright holders to curtail the illegal use of copyrighted material online. Opponents of the proposed law say in infringes on freedom of speech and the ideal of the internet as a boundless source of information and critical thought (as Eddie Campbell explains here, the threat of the bill is already having a chilling effect). One of the initial corporations to back the bill, domain name registrar Go Daddy, pulled its support after a user backlash and threatened boycott. Now that Marvel Entertainment and parent company Disney, as well as DC Comics owner Warner Bros, have been revealed as supporters, many people have been calling for similar boycotts of these companies, with Marvel coming in for special scrutiny.

I might remark at this point that while it is heartening to see such support for First Amendment rights, fair use, and a free and democratic web, it is a source of continuous heartbreak that the same forces of independent thought and moral righteousness have not been arrayed against Marvel/Disney on the issue of doing right by way of Jack Kirby's legacy in terms of giving credit, copyright, and royalties for his creations to the family of Jack Kirby, but to do so would be to confuse two different issues. Why quibble? I support both Marvel Boycotts. Down with SOPA! Justice for Jack Kirby!

If you don't agree with SOPA, and as of this writing, many, many people, including internet trendsetter Al Gore and Google's Sergey Brin, do not, you could do worse than write a "Dear Marvel" letter at this site.

(image: detail from "Ecce Homo" by Gilbert Hernandez)
Posted by BK at 9:18 AM