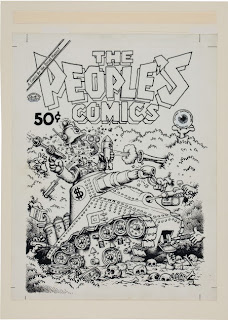 Heritage is auctioning one of those once in a lifetime finds. Collectors will groan at the pure innocence of the man who found this hoard of extremely valuable comics in his aunt's closet.

You can see the auction house's own press release here. Other items in the auction but not the same collection, include Robert Crumb's cover for The People's Comix, estimated at $30,000 --as well as other art by Kirby, Ditko, Barks, Frank Miller, Wood, and more. Check out the full listing here.

I wonder if the Hernandez Bros know this guy?

Rorrer, 31, of Oxnard, Calif., discovered his great uncle Billy Wright's comics neatly stacked in a basement closet while helping clear out his great aunt's Martinsville, Va., home a few months after her death. He said he thought they were cool but didn't realize until months later how valuable they were.

Rorrer, who works as an operator at a plant where oil is separated from water, said he was telling a co-worker about Captain America No. 2, a 1941 issue in which the hero bursts in on Adolf Hitler, when the co-worker mused that it would be something if he had Action Comics No. 1, in which Superman makes his first appearance.

"I went home and was looking through some of them and there it was," said Rorrer, who then began researching the collection's value in earnest.

He found out that his great uncle had managed as a boy to buy a staggering array of what became the most valuable comic books ever published.

"This is just one of those collections that all the guys in the business think don't exist anymore," said Lon Allen, the managing director of comics for Heritage Auctions, the Dallas-based auction house overseeing the sale.

"The scope of this collection is, from a historian's perspective, dizzying," said J.C. Vaughn, associate publisher of Overstreet.

Once Rorrer realized how important the comics were, he called his mother, Lisa Hernandez, 54, of League City, Texas, who had divided them into two boxes. She sent one to him and kept the other one at her house for his brother. Rorrer and his mother then went through their boxes, checking comic after comic off the list.

"I couldn't believe what I had sitting there upstairs at my house," Rorrer said.

Hernandez, who works as an operator in a chemical plant, said it really hit her how valuable the comics were when she saw the look on Allen's face after he came to her house to look through the comics she had there.

"It was kind of hard to wrap my head around it," Allen said.

Rorrer said he only remembers his aunt making the fleeting reference to the comics when she learned that he and his brother, Jonathan Rorrer, now 29 of Houston, liked comic books. He said his great uncle, who died in 1994 at age 66, never mentioned his collection.

Allen, who called the collection "jaw-dropping," noted that Wright "seemed to have a knack" for picking up the ones that would be the most valuable and managed to keep them in good condition. The core of his collection is from 1938 to 1941.