Notes: Towards A Short History of the Cartoonist Guild 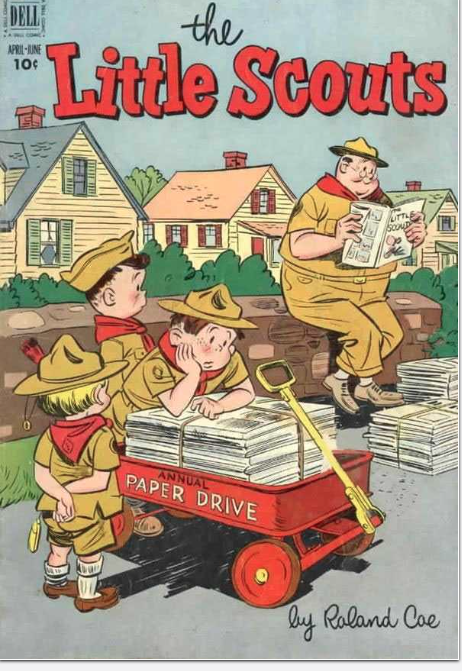 I had a nice Thanksgiving mini-holiday and of course bought some old comics, including a couple issues of The Little Scouts by Roland Coe. The series was published by Dell in the 1950s and is kind of a milder version of Little Lulu. Very charming. It was based on the magazine cartoons by Coe, who was well-known for his very family-friendly advertising and gag panel work. He died in 1954 and so is not widely-known among old-time comic art fans, but digging into his life it seems he was sort of an interesting guy and maybe even a pivotal figure. As a result of this digging, I've started researching the short-lived (1936-1939) Cartoonist Guild of America, a leftist grouping of mostly New York City magazine artists that organized to standardize payment rates for gag cartoons, etc. It predated the more conservative National Cartoonist Society by about a decade but seems to have embodied the same spirit of fraternity and good-time hijinks the Society is known for. The Guild was also quite militant, with many members marching in protests and engaging in other forms of activism. They published a blacklist of low-paying magazines, picketed College Humor magazine*, and some were even arrested, as reported in the New York Tmes and in some of the stories below.  The group published its own magazine/newsletter, called OK, copies of which I have not seen. I hope they exist!

There is not much easy-to-find info about this group; its membership eventually numbered in the hundreds before World War II threw everything into chaos. The Guild was part of a large wave of labour movements taking place during the Depression, and mirrored what was happening among other culture industry folks like newspaper workers (Newspaper Guild) and workers in the animation industry (the Screen Animators Guild led historic strikes against Warner Bros and Disney in the 30s).

Union agitation was on the defensive during the post-War/Cold War, with organizers branded as communists and blacklisted.  What happened to the comic book industry in the 1950s is well-known, as are attempts by Neal Adams and others to unionize comic book creators in the 60s and 70s. There was another Cartoonist Guild that started up as part of the anti-war movement during Vietnam and included many underground and even New Yorker cartoonists but its reason for existing seemed to fizzle out in the 70s.

It's heartening to learn of cartoonists (many of whom are among my all-time favourites) who did manage to effect postive change through group action, even if it was 80 years ago now.

I've dug up some anecdotal quotes and articles that mention the Guild. It seems that Vernon Greene, a journeyman cartoonist who eventually took over Bringing Up Father from George McManus in the 1950s, was involved in the Guild (as well as its successor, the NCS) and there are some Guild records among his papers at Syracuse University, which I would love to examine some day.

Here's what I've found so far:

"Janice Duncan was as politically left as her husband, and both were strong supporters of workers as they fought to form unions in the 1930s. Gregor Duncan had been a founding member of the Cartoonists’ Guild, a precursor to the National Cartoonists Society, in March 1936. The Cartoonists’ Guild, led by President Roland Coe and Vice President Ned Hilton, fought for better working conditions for artists, including a $15 minimum fee for magazine cartoons. The guild also kept a watchful eye out for “scab cartoonists” who would take the place of one of their own who went out on strike in sympathy with the unions. One of Duncan’s best friends, New Yorker cartoonist Charles E. Martin, who signed his work “CEM,” was also a member of the guild, along with another friend, Gregory d’Alessio. Duncan was an active member of the guild, both politically and through his contributions to OK, the official publication of the organization. He contributed ink and litho crayon portraits of Gregory d’Alessio, Garrett Price and Fritz Wilkinson to the “Thumbnails” feature of the magazine in 1937, as well as a lithographic image titled “Longshoremen.” The magazine regularly featured fine art examples of the cartoonists’ work, such as Duncan’s lithograph. The Cartoonists’ Guild patterned its constitution after that of the American Newspaper Guild, cofounded by journalist Heywood Broun. The two groups often met together, in support of causes that affected their respective memberships." --Tom Heintjes
___

"Here's the story I was told about Syd Hoff and his mother's three little words that signaled her acceptance of his career:
Bronx-born Syd sold his first cartoon at the age of 17 and didn’t waste any time joining The Cartoonists Guild. The Guild, run by then NY Post cartoonist extraordinaire Roland Coe, was founded as a union for its members. (This is before the existence of/no relation to the current animators' union, also referred to as The Cartoonists Guild.)
When Syd joined in 1930, the prevailing New York City-based magazine gag cartoon rate was between $3 to $5. The Guild had mailed a letter to all of its cartoon markets. The letter asked magazine editors to sign it, pledging a uniform pay rate of $15 per cartoon. Most of the magazine editors acquiesced.
However, College Humor magazine refused to sign. College Humor was an important, major cartoon market. So Coe, Ned Hilton, Colin Allen and other Guild members picketed in front of the College Humor offices. College Humor called the police. The cartoonists were hauled away.
That night, Syd’s mother was at home, oblivious to all this, cooking dinner. The radio, as usual, was tuned to the six o’clock news. She hear the announcer's voice: “There was a demonstration this afternoon. Among the demonstrators arrested was Sydney Hoff.”
And Syd’s mother fainted.
As Syd told it to Bill, it was many hours later; late that night, when Syd was released from the Manhattan holding cell. Syd took the long subway ride back home, and walked back to their dark apartment building. Upon entering, his mother, who had recovered and was waiting up, calmly announced to her son, “Your dinner’s cold!”
Bill would always laugh out loud at this moment of motherly resignation. Syd was, for better or worse, a cartoonist from that point on." --Mike Lynch

"Yet, Syd’s mother didn’t find anything humorous about the day when Syd wound up in a holding cell at the local police station after supporting fellow members of the local Cartoonists Guild in a protest against below-scale rates paid by College Humor Magazine.* Although Syd’s prices were at scale, he decided to support his friends and join the protest march on the corner of 48th Street and 5th Avenue – until a police officer decided to haul them off to jail for obstructing pedestrian traffic. As they sat in the holding cell, the group sang “Solidarity Forever,” the popular union anthem originally written for the Industrial Workers of the World. Unfortunately for Syd, this made the evening news, which his parents heard over the radio while preparing dinner. “Among those cartoonists arrested was Sydney Hoff.” My grandmother immediately fainted. Later that evening, Syd was released from jail, and after a long subway ride home he walked through the front to be greeted by his mother’s welcoming words – “Your dinner is cold.” His kid sister, one of his great supporters, was quick to follow, asking “How’s Alcatraz?” " --Carol Edmonston
___

Ned Hilton was a founding member of the Cartoonists Guild of America in March 1936. According to the Times, June 7, 1936, the guild blacklisted six magazines: College Humor, Rockefeller Center Weekly, The Voyager, Promenade, Movie Humor and Real Screen Fun. These magazines refused the guild’s demand to pay a minimum of $15 for comic drawings and to pay for the drawings within thirty days of acceptance. At the time, Hilton was vice-president of the guild.

Eleven days later, Hilton and seventeen other cartoonists for arrested for picketing outside the College Humoroffice. According to the Times, the police confiscated 45 pencils from the cartoonists. After five hours at the police station cells, the cartoonists spent another four hours in the night court detention room. The magistrate dismissed the charge.---Alex Jay
___

Former Buffalo artist first president of cartoonists: We have with us all kinds from John L. Lewis, champion of industrial unions to Robert Montgomery who captains the glamorous hosts of Hollywood in the Screen Guild. Now a new leader arises, Roland Coe, former Buffalo newspaper cartoonist, to fight the battles of his brother artists as first president of the Cartoonist Guild of America.
March, 1936, in New York City, seven men, headed by Mr. Coe, organized to force from national magazines a minimums price per drawing, second rights, and payment on acceptance. Growing from seven to several hundred in nine months the membership includes well-known men like Sidney Hoff, Frank Owen, William Gropper, Whitney Darrow, Jr., Ned Hilton, Charles Adams and Garrett Price.
So far most of the editors have signed the Guild contract agreeing among other things to a minimum price per drawing and of the guild. --Alex Jay

"First Exhibit of the Cartoonist Guild of America A rival of our own International, loaned to Pittsburgh for one week by the Cartoonist Guild of America original cartoon drawings, cover designs, and sketches by Howard Baer, A. Birnbaum, Roland Coe, Gregory D'Alessio, Whitney Darrow, Jr., Jaro Fabry, Hoff , Jay Irving, Melisse, Frank Owen, Garrett Price, Carl Rose, and many others. All of the drawings are complete with "gag" lines, and many have appeared in leading publications such as The New Yorker, Esquire ,-Life, Judge, Saturday Evening Post and Colliers. Take a few minutes this week for an exhibit of rare humor and interest." --ad in Pittsburgh Post-Gazette, Nov 16 1936 pg 11
___ 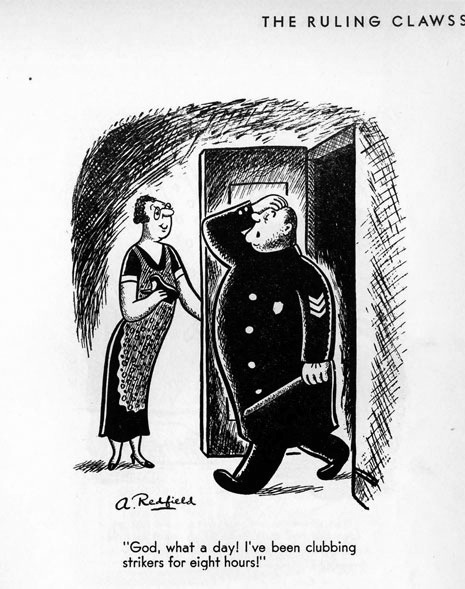 This is very interesting. Thank you. I just learned that my uncle Haile Hendrix (whose life I have been researching for some time now) was the editor of the Guild's original (1936) publication "Cartoonews." I will certainly be going to Syracuse to look at those archives--though probably not until this summer. I'll report back here about what I find, if you like.