Umberto Eco On Fascism and His Introduction to U.S. Comics, or, "Is Dick Tracy Fascist or Not?"

I recently came across this great concise summary of Umberto Eco's list of 14 characteristics of fascism. When you follow the links, you get the full original essay from The New York Review of Books, in which Eco talks a bit about growing up in Italy in the '40s under Mussolini and the liberation of his small town by partisan rebels and U.S. soldiers:

"A few days later I saw the first American soldiers. They were African Americans. The first Yankee I met was a black man, Joseph, who introduced me to the marvels of Dick Tracy and Li’l Abner. His comic books were brightly colored and smelled good."

Chester Gould's Dick Tracy comic strip was translated to comic books many times. During the years of World War II it was reprinted in Dell's Super Comics alongside other funny pages cohorts like Little Orphan Annie. Perhaps this is how Eco first encountered the strip? Likewise, Al Capp's L'il Abner was a regular feature in Tip Top Comics during the same period.

I wonder, by mentioning them here, is Eco hinting at the weird right-wing politics of Gould and Capp and their comic strip tough-guy counterparts? Or is he simply conflating his budding awareness of the wonders of U.S. pop culture with this primal example of the democratic nature of post-Fascist society?  As usual with Eco and his playful essays, there is probably a lot more going on than it seems on the surface.

Is Tracy fascist? Eco starts his piece by wondering why the Italian "Fascist" became the default term for describing any and all varieties of totalitarian strongman, from dictator or president right on down the line to your friendly neighbourhood cop on the beat.


"During World War II, the Americans who took part in the Spanish war were called “premature anti-fascists”—meaning that fighting against Hitler in the Forties was a moral duty for every good American, but fighting against Franco too early, in the Thirties, smelled sour because it was mainly done by Communists and other leftists. … Why was an expression like fascist pig used by American radicals thirty years later to refer to a cop who did not approve of their smoking habits? Why didn’t they say: Cagoulard pig, Falangist pig, Ustashe pig, Quisling pig, Nazi pig?"

Tracy is a cop, and his tough-guy, decades-long merciless war on crime was calcified and largely out of favour by the time the late-60s counter-culture was in full bloom (although it didn't stop Underground cartoonists like Jay Lynch and Robert Crumb from seeking an audience with Gould in his Herald-Tribune office in 1968). Cantankerous conservatives Gould and the acerbicly satiric Al Capp (think of Capp vs John Lennon and Yoko Ono), and the comics they created, were labeled fascist by 60s observers, just like 80% of the mainstream culture of the time. But it's a big leap from "asshole" to "fascist" and so much of this seeming cultural change can be explained away as adolescent posturing and inter-generational iconoclasm. But the shift in tenor on both right and left during the Cold War was also very much a reality. Outside of an increasing graphic/artistic weirdness, and the occasional patronising stab at "with-it" trendiness, Tracy and Gould were out of step with their surrounding culture. (This was true of the Underground vs Mainstream dialectic everywhere. For left-wing intellectuals like Art Speigelman in the 60s and 70s, it didn't matter that the Jewish creator of Captain America had personally shot Nazis during the War.  1960s Captain America had turned to fighting communism in the comics and in the era of Vietnam and the draft, that made Kirby and Marvel the enemy.) 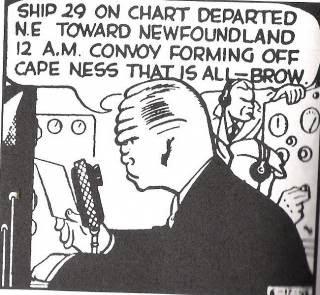 This was not always the case. 1940s Tracy in the comic strips was a big supporter of the U.S. war effort and, as part of the frontline of comic strip propagandists, fought his fair share of Nazis, most notably in a well-known continuity begun in 1944 and featuring The Brow, an Axis spy who bedevils Tracy and the gang for months, escaping a variety of the usual Gould-ian deathtraps (and even a romance with Gravel Gertie!) before finally being impaled on a flagpole flying the U.S. flag.


Eco wraps up his famous essay with a plea for vigilance, noting that "Ur-Fascism is still around us, sometimes in plainclothes." What comics fan doesn't remember that the name of Gould's strip was originally "Plainclothes Tracy" until it was changed by the publisher Captain  Joseph Patterson to the tougher, slang-ier-sounding "Dick Tracy"? Certainly the past few years have seen a reassessment of our relationship with police of all stripes, in popular culture and in real life, and we can only wonder what having actual neo-Nazis (Bannon, et al) in the White House will mean for this horrible trend.

"We must keep alert, so that the sense of these words will not be forgotten again. Ur-Fascism is still around us, sometimes in plainclothes. It would be so much easier, for us, if there appeared on the world scene somebody saying, “I want to reopen Auschwitz, I want the Black Shirts to parade again in the Italian squares.” Life is not that simple. Ur-Fascism can come back under the most innocent of disguises. Our duty is to uncover it and to point our finger at any of its new instances—every day, in every part of the world. Franklin Roosevelt’s words of November 4, 1938, are worth recalling: “I venture the challenging statement that if American democracy ceases to move forward as a living force, seeking day and night by peaceful means to better the lot of our citizens, fascism will grow in strength in our land.” Freedom and liberation are an unending task." 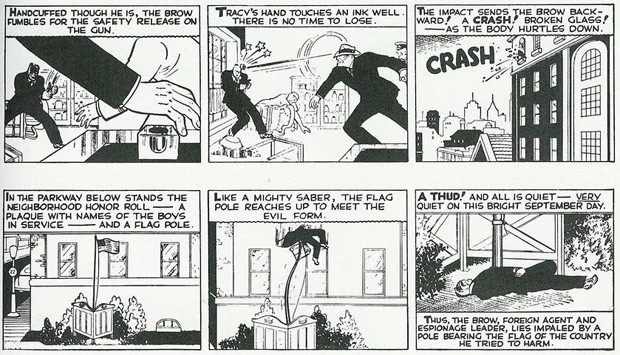 Anyway, here's the shortened list from the article mentioned above. Some of these track to Tracy, but there is more Trump here than Chester Gould:


While Eco is firm in claiming “There was only one Nazism,” he says, “the fascist game can be played in many forms, and the name of the game does not change.” Eco reduces the qualities of what he calls “Ur-Fascism, or Eternal Fascism” down to 14 “typical” features. “These features,” writes the novelist and semiotician, “cannot be organized into a system; many of them contradict each other, and are also typical of other kinds of despotism or fanaticism. But it is enough that one of them be present to allow fascism to coagulate around it.”

1. The cult of tradition. “One has only to look at the syllabus of every fascist movement to find the major traditionalist thinkers. The Nazi gnosis was nourished by traditionalist, syncretistic, occult elements.”
2. The rejection of modernism. “The Enlightenment, the Age of Reason, is seen as the beginning of modern depravity. In this sense Ur-Fascism can be defined as irrationalism.”
3. The cult of action for action’s sake. “Action being beautiful in itself, it must be taken before, or without, any previous reflection. Thinking is a form of emasculation.”
4. Disagreement is treason. “The critical spirit makes distinctions, and to distinguish is a sign of modernism. In modern culture the scientific community praises disagreement as a way to improve knowledge.”
5. Fear of difference. “The first appeal of a fascist or prematurely fascist movement is an appeal against the intruders. Thus Ur-Fascism is racist by definition.”
6. Appeal to social frustration. “One of the most typical features of the historical fascism was the appeal to a frustrated middle class, a class suffering from an economic crisis or feelings of political humiliation, and frightened by the pressure of lower social groups.”
7. The obsession with a plot. “The followers must feel besieged. The easiest way to solve the plot is the appeal to xenophobia.”
8. The enemy is both strong and weak. “By a continuous shifting of rhetorical focus, the enemies are at the same time too strong and too weak.”
9. Pacifism is trafficking with the enemy. “For Ur-Fascism there is no struggle for life but, rather, life is lived for struggle.”
10. Contempt for the weak. “Elitism is a typical aspect of any reactionary ideology.”
11. Everybody is educated to become a hero. “In Ur-Fascist ideology, heroism is the norm. This cult of heroism is strictly linked with the cult of death.”
12. Machismo and weaponry. “Machismo implies both disdain for women and intolerance and condemnation of nonstandard sexual habits, from chastity to homosexuality.”
13. Selective populism. “There is in our future a TV or Internet populism, in which the emotional response of a selected group of citizens can be presented and accepted as the Voice of the People.”
14. Ur-Fascism speaks Newspeak. “All the Nazi or Fascist schoolbooks made use of an impoverished vocabulary, and an elementary syntax, in order to limit the instruments for complex and critical reasoning.” 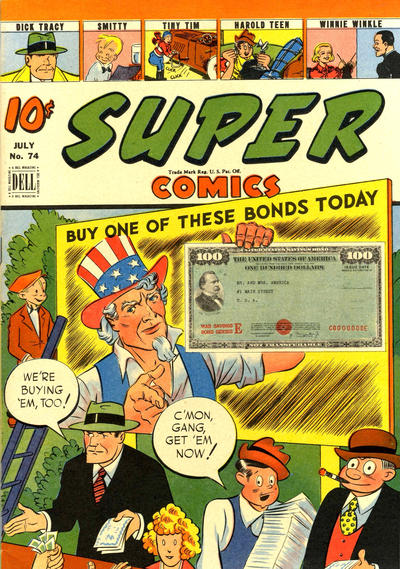 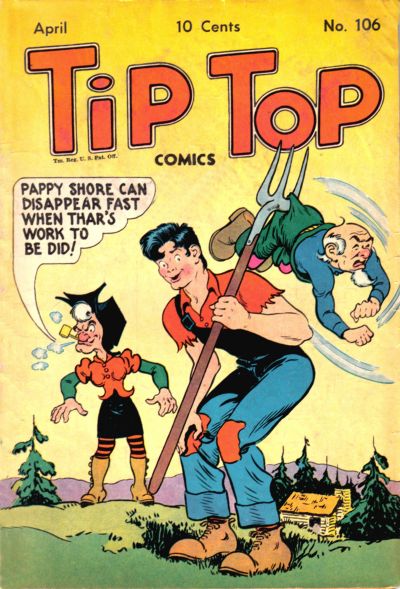 I like this a lot. Sadly, your concluding picture links are broken. I hope you can fix them.

fixed it and added a bit --thanks