I've often written about superheroes as the enemies of the working class and the paucity of actual "working class heroes" in the history of comic books. The working class characters in comics are most often pegged as villains, or, if they are particularly troublesome, "supervillains":

"We search in vain for examples of the working class superhero. With few exceptions, he is nowhere to be found. In his place, everywhere we find the figure of the superhero working on the side of the bosses, whether as an ideological footsoldier in the armies of the mass media (the Daily Planets and Bugles, WHIZ's and WXYZ's), as a representative of the Repressive State Apparatus (the police and armed forces), or even as the boss himself: we need not enumerate how many capitalists seem to moonlight as masked vigilantes, erstwhile Robin Hoods reduced to acting as night watchmen over the money bins of their fellow billionaires.Ah, but who do they guard against? Who appears to play the role of Beagle Boy opposite the concerted efforts of these super-powered Scrooge McDucks? The superhero's triumphalist rhetoric of truth, justice, and the American Way must not remain unchallenged --nor can the use of force continue to be monopolized by a single comic book class. At last, a dim figure steps forward to take up its historic role of class antagonism.

Enter the supervillain, shambling leftward onto the world-historic stage. As an expression of class anxiety, he is unparalleled in art. From his secret origins as the stepchild of the mustache-twirling Oil Can Harry of melodrama and the grand-guignol grotesques of Dick Tracy, the comic book villain embodies all of the perceived threats to the capitalist utopias envisioned by the comic book creator, a world of shiny metropolises, lorded over by masonic fraternities of top-hatted magicians, fetishistic playboys, and patriarchal circus strongmen."

Cartoonist Zach Weinersmith has made the observation explicit with this humourous rant from billionaire Bruce Wayne aka Batman, who enlightens his ward Robin the Boy Wonder about true role of the superhero. Weinersmith's webcomic Saturday Morning Breakfast Cereal is very funny and (dare I say it?) highly intellectually stimulating. 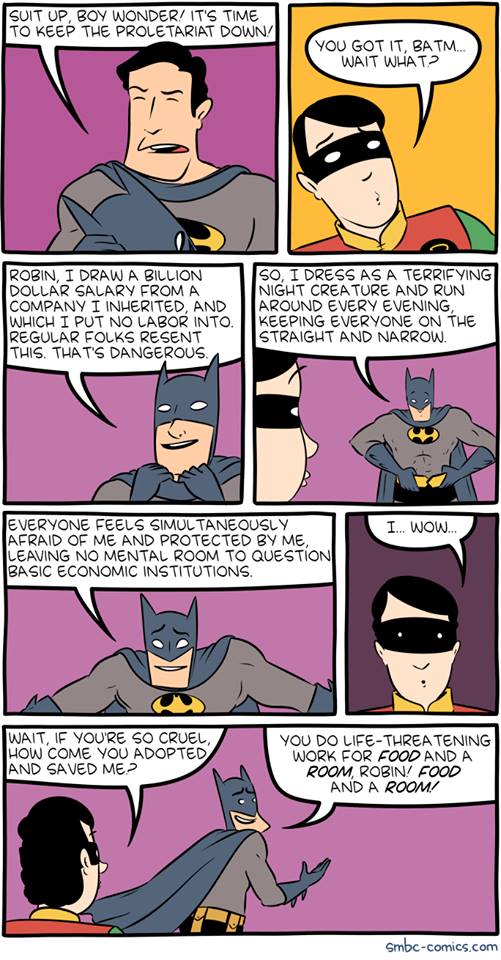