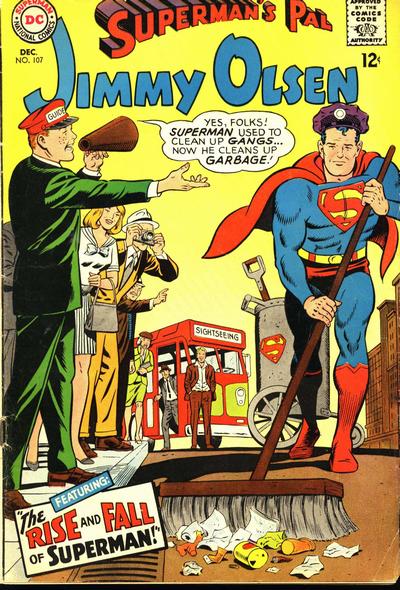 (I thought this would be a good time to repost The Working Class Heroes Project from last year:)


"The super-hero comics of the 1940s also had this rough, working class quality. A cartoonist like Jack Kirby is a perfect example. His characters -- Captain America, for example -- were an extension of himself. Kirby was a tough little guy from the streets of New York's lower East Side, and he saw the world in terms of harsh, elemental forces. How do you deal with these forces? You fight back! This was the message of all the comic strips created during the Great Depression of the 1930s, from Popeye to Dick Tracy to Superman." --Robert Crumb, quoted in The R. Crumb Handbook

In honour of Labour Day in Canada and the U.S., a few notes on the dearth of actual, blue-collar workers among the legions of superheroes created since the 1930s. The Working Class Heroes Project is a work in progress.

Most superheroes were created by working-class cartoonists in the sweatshops of the 1930s, 40s, 50s and 60s. Ironically, very few superheroes are actually working-class. Outside of Bob Burden's Mystery Men, where are the superheroic truck drivers, mechanics and steelworkers?

While many superheroes held down day-jobs as white-collar workers or professionals of various stripes, very few secret identities would qualify as blue-collar, industrial workers. At their point of origin, and as wish-fulfillment fantasies, superheroes are generally a privileged lot, and seem to fall roughly into four categories: playboy millionaires/royalty; educated professionals (doctors, journalists, pilots, scientists); professional athletes, entertainers, and broadcasters; and agents of the state (soldiers, police).

As Ariel Dorfman writes in The Empire's Old Clothes, "the superhero's triumph is based on the omission of the working class, the elimination of a community or collective which could transform the crisis and give it a meaning or new direction."

Here, then, is a tentative list of the rude mechanicals and producers of wealth who moonlight as superheroes, be they prole or lumpen.

(Thanks to Jeet Heer and the various Oddball Comics and Superman fans who have contributed thoughts on this project). 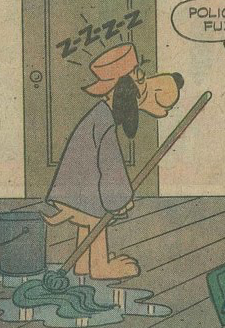 Please feel free to add additions or corrections to this list. I am especially interested in heroes from the "Golden Age" (1930s-40s) or earlier (even Hercules cleaned stables --and David herded sheep).

Masked adventurers and comic-strip stars welcome. Please note: for the purposes of this list, I am only interested in heroes with working-class jobs (ie, blue-collar/pink-collar/"proletarian"). I will accept tradespeople, factory workers, farm workers, unemployed/poor, craftsmen, etc. NO white-collar workers, rich people, politicians, government agents, or cops. I will accept Private Eyes and small business owners ("petit bourgeois") in a pinch.
Posted by BK at 1:07 AM