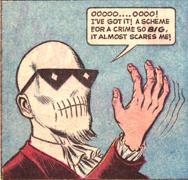 Jay Stephens talks about Jerry Siegel's Terror Twins --two beatnik (or are they mod?) supervillains from Gold Key's The Owl-- at his Monsterama blog.

This series of comics is long past the major part of Siegel's very impressive "Second Act" in U.S. Silver Age comics and almost his last stop as a professional writer (the comic is pretty bland but not downright horrible or anything, just stupid, uninspired 1960s "camp" from a broken, middle-aged man) but it still has a certain fascination...

His work from this time period is still very easy to find --most of the non-DC work is not collected and prices on the old comics Siegel worked on are relatively affordable. His work for foreign publishers is harder to find, but Titan books recently published a hardcover collection of his Spider strips.
There is also a fairly thorough bibliography of Siegel here. While my favourite stories remain the Superman family tales from the 1960s, these later efforts still reveal alot of Siegel psychology. You don't get much of the feelings of loss, nostalgia, and aging found in the DC work but more of a sense of earnestness oddly coupled with that lifelong need to parody.
Posted by BK at 6:51 PM