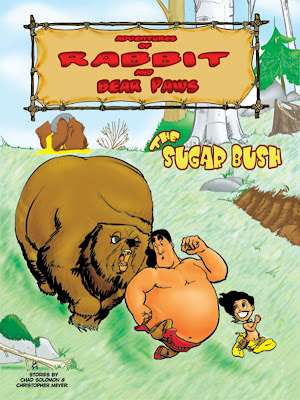 Rabbit and Bear Paws is a weekly webcomic created by Chad Solomon, a member of the Ojibway First Nation. According to its website, "This fresh and funny comic strip for the young and young at heart is created and drawn with the guidance of his community elders in collaboration with writer Christopher Meyer. The first series of comic strips are based upon the teachings of The Seven Grandfathers (wisdom from the Anishinabek Community) and are rapidly gaining enthusiastic fans for their vibrant and entertaining images of Native traditions and oral history."

Rabbit and Bear Paws: The Sugar Bush is a 32-page full-colour graphic novel (in format it is more like a European comics "album"). The book tells the story of two young Ojibwa brothers who use a magic potion and their wits to elude invading English soldiers in 18th-Century Canada. Tiny, fast and prankish, Rabbit is the leader of the two brothers. Rabbit steals his grandfather's potion and transforms himself and Bear Paws, his much larger and slower brother, into animals in order to steal some soup from the village pot. Caught and sent to gather firewood, the pair eventually meet up with a troop of English soldiers and travel all the way to Niagara Falls before escaping with the help of some animal friends. Along the way they recount some stories of the legendary Nanaboozhoo.

In format, basic plot, and character, the book emulates the Asterix and Obelix adventures by Goscinny and Uderzo, right down to the introductory map and character descriptions at the start of the albums. The fact that Rabbit and Bear Paws is an homage bordering on pastiche doesn't mean that it doesn't have some interesting characteristics of its own. Most successful comics franchises have spawned numerous formulaic imitators that have gone on to great successes in their own right, evolving over time into distinct entities. Asterix itself (first published in 1959) is a reworking of Oumpah-pah, the American-Indian character originally created by Goscinny and Uderzo for the U.S. market but published initially in France in 1958 (heck, even Peyo's Smurf albums have a similar theme of magic villages ruled by wise elders and surrounded by many dangers).

But rather than rehearse the many many parallels between Asterix and Rabbit and Bear Paws, I'll mention a few of its more-or-less unique features. What sets Rabbit and Bear Paws apart is a concern with Ojibwa lore and a desire to impart not only the wisdom of the elders but a respect for same. To this end, the adventures of the two titular brothers are laced with references to creation myths, the Wendigo, and lots of talk about respecting nature and helping animals (the magic potion they steal from their grandfather temporarily transforms them into whatever animal they imagine).

Solomon's drawing shows quite a bit of promise: it is fairly accomplished with a slick line and attention to detail in the Uderzo, bigfoot tradition (the colouring in the book, especially the backgrounds, is a lacklustre computerized job). The writing, especially the preachy bits and much of the dialogue, reads as slightly stilted, and lacks the punch, humour and wonderful wordplay of its model, but is still serviceable for a story that is intended (I think) as something of a primer.