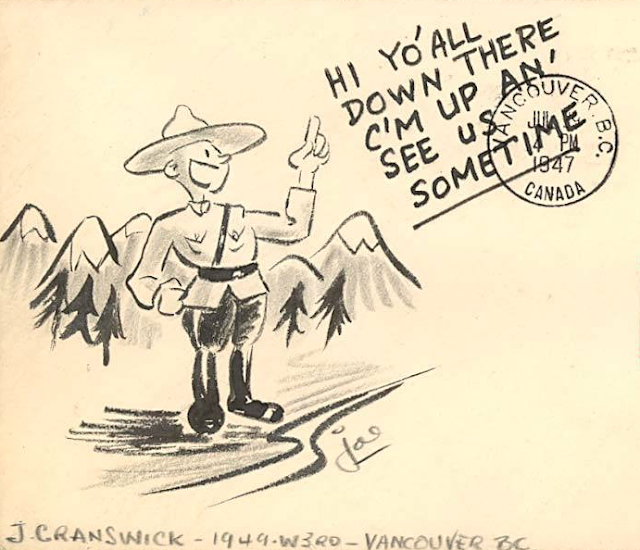 I came across an auction for this postcard on Ebay. The seller is a stamp dealer and apparently bought this as part of collection featuring famous and not-so-famous cartoonists. It looks like the sort of project a fan or hobbyist (or burgeoning cartoonist) would do, writing away to every cartoonist with a public address and asking for a free sketch. The collection comes from Abilene, Texas, which makes it all the stranger that the collector tracked down the totally unknown cartoonist Joseph "Joe" Cranswick of Vancouver, British Columbia.

Joe Cranswick was a newspaper cartoonist, but for what Vancouver newspaper I'm uncertain. The card is postmarked 1947, so he must have been at work there at that time. In later years (through the 1960s) he was the editor of Thy Kingdom Come, a magazine published by The Association of the Covenant People, to all appearances a Vancouver offshoot of the Christian sect of British Israelites, which still has a church in Burnaby, BC. (There was a Joe Cranswick who worked as a CBC technician in the 1960s and 1970s in Burnaby as well, but I'm not sure if he's the same).

The address on the card still exists in Vancouver. I just started on this mystery, so it's still a work in progress.