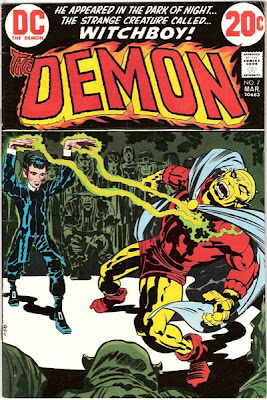 Two things I've been devouring lately: the 50th issue of The Jack Kirby Collector (aka Kirby Five-Oh!) and various Kirby comics from the 50s, 60s and 70s. The giant Kirby Collector issue, published in 2008, is made up of a number of themed articles incorporating the number 50, including a list of top 50 character designs by Sean Kleefeld. You should really seek out the issue to read Kleefeld's arguments but the list really got me thinking about Kirby's approach to costume and character and I started looking more critically at some of his superhero and monster comics with a focus on costume.

1. Ant-Man: A pure superhero costume. The design incorporates totemically aspects of the character's namesake powers in a very bold and stylized manner. The helmet is functional in that it serves as a both mask and source of his power (ability to communicate with and control ants). At the same time it looks like an ant head! The rest of the costume follows the conceit of the helmet. The ant symbol on the costume is stylized almost to the point of abstraction.* 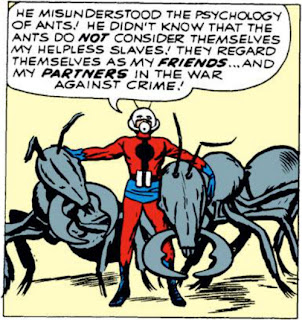 2. White Zero: This is Kirby doing a generic superhero costume and gives us an idea of how he might approach the idea of the superhero as an outsider, almost as parody, but using a more intellectual attack than in Fighting American or Brand Echh. A Kirby cosmic design that is also more of a traditional superhero than almost anything he created after 1970. 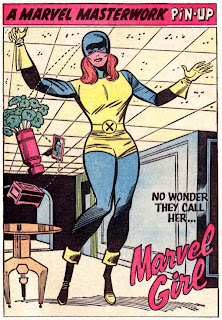 4. OMAC: Very unique costume that spotlights a Kirby design feature that few other older artists outside of the classic strip creators paid attention to: hair. I could write a whole separate list of best superhero hair, but suffice to say that OMAC's mohawk elegantly marks him as both futuristic and a warrior, perfect visual shorthand. The rest of the costume, including the all-important, all-seeing central eye, is nothing to sneeze at either. 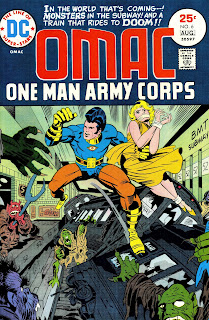 5. Capt. America: One of the first iconic Kirby designs. I've read that Joe Simon did the initial sketch but Kirby certainly refined Cap to an elegant purity over the years. 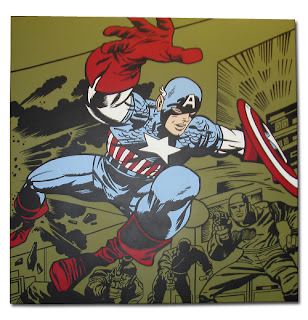 6. Impossible Man: Besides being a great fun character with a classic colourful look, Impy is representative of that whole trademark Kirby skinny alien approach to character design. 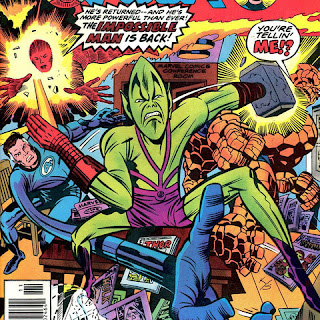 7. Ikaris: A personal nostalgic favourite and representaive of the elaborate goofy god designs. 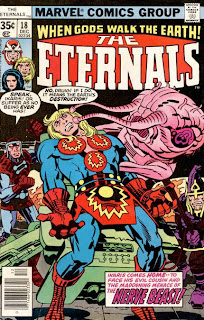 8. Klaw: A great villain design and one of the first, along with Quicksilver, zig-zag costume designs. 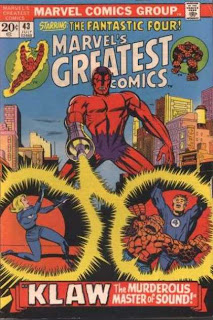 9. Thing: Simple, but visually interesting. Instantly recognizable, even though never drawn the same way twice. The Thing makes the character's skin the costume. 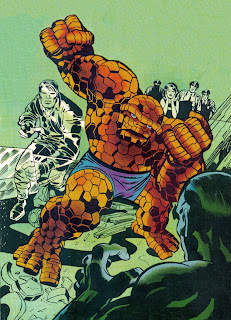 
-----
I like the generic 70s heroes (White Zero, Manhunter, Sandman) and the monsters-in-trunks (Thing, Demon, Karkas) for their simplicity and streamlining. But I have to admit that what makes Kirby interesting is the more trademark weirdness. The busy-ness and extraneous zig-zag zaniness. In terms of the heroes, maybe Thor was the first of that lot? Certainly the various gods, both New and Norse, exemplified that approach the most. There are interviews in Kirby Five-Oh with Kirby pastiche artists like Joe Casey collaborator Tom Scioli and John Romita Jr (he illo'd the Neil Gaiman Eternals heresy) and lots of talk about the modern approach to making the Kirby gods uniforms look more logical or more like skins since we can't imagine immortal beings with control over atoms pulling on their pants, even though the "uniforms" should really be seen as ceremonial or religious garb, not a uniform per se. The great thing about the costumes, however, is that Kirby DID imagine these gods pulling on their pants. We can imagine him saying to himself, to the extent he ever verbalized his creative process, "This is a super-god, so therefore he needs a super-god costume, like a superhero's but more awesome. Naturally, this includes a pair of trunks on top of leotards. But these are cosmic trunks and extra-dimensional leotards." Sometimes he shows someone like T'Challa ceremoniously putting on the Panther suit, or suddenly transforming (Ben Bolt, Sersi), but mostly the latter-day cosmic Kirby heroes have very little in the way of civilian garb and wear their costumes like everyday clothing. Of course, the weirdness of the clothing lends a certain majesty or alien-ness to the characters. I like to imagine Ikaris or Orion pulling on their wrestler-style shorts or stiff loincloth one leg at a time, just like any other super-schlub. In Kirby's proletarian approach, this seems perfectly natural.

Some of Kirby's costumes seem designed around a functionality or specific use or feature, but still combine with a ritual/cultural look. I'm thinking of Black Bolt's wings and antennae, Metron's circuit diagrams, and Orion's helmet and astro-harness (without which he looks naked). The classic example is Captain America, a mix of propaganda and army uniform, gaudy and utilitarian.

One of my favourite examples from the pile of Kirby comics I've recently read is "Witchboy!" from The Demon #7 (March 1973): Kirby teams up his two 1970s DC magic characters in a story where The Demon rescues Klarion from the pursuing puritan-garbed elders of The Beyond Country. Quite wonderful pacing, great characterization. The Demon lives in Gotham City and as Jason Blood he goes to parties with his friends. He has a sexy blonde girlfriend named Glenda Mark. She has a wide forehead with dark eyebrows. Every single panel here is sheer delight, each with some novel graphic detail, variation in perspective and camera angle, and lots of action. Sometimes Kirby drops the backgrounds but his larger panels and spreads have unique, economic-yet-decorative scene-setting detail. The Demon's costume is interesting. Supposedly medieval, it is made up of a red jersey with matching cuffs/bracelets with matching black-and-white circular pattern, red belt and shorts, with little red booties and a baby blue cloak/cape fastened with a circular yellow clasp, all of which contrasts nicely with his yellow skin and red eyes. The Demon often drapes the cloak over himself and can use it as a magical prop, as when he covers up Klarion and makes him vanish at the end of the story. Jason Blood, The Demon's alter ego, is distinctive as well. Cut in the heroic leading man mold, his craggy good looks and broad shoulders are accented with slightly-pointed ears and curly eyebrows, topped off by slicked-back red hair with a distinctive widow's peak and broad white streak. The red hair is a nice piece of continuity with his surname and The Demon's costume. 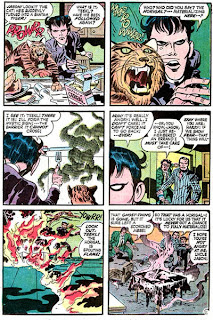 Klarion's outift is less interesting but still graphically bold: a simple blue/black puritan-style suit. He gets his graphic impact from the contrast between the skinny, purple/black-clad child's body and large head with big eyes and expressive features, including two horn-like curls on the top of his black hair. For further contrast, Klarion carries around the orange cat Teekl, his tiger-like familiar. Both Etrigan and Klarion are mischeivous and laugh alot. Both are fun variations on the standard superhero type with ancestry in earlier Kirby concepts. The Demon is one of Kirby's monster heroes (The Thing, Hulk, Karkas), but with a more sophisticated power set (spells, flame-throwing), and Klarion, as a sort of delinquent child/adolescent, has much in common with Kirby's kid gangs (Newsboy Legion, Boy Commandos). They make a good team, an oddball witchy couple with Klarion the troublesome nephew and Jason Blood/Etrigan the good-natured, wise and protective uncle.

The list has tons of famous and obscure characters as well, like Mark Moonrider (#16), and The Goozlebopper (#49). But no MODOK (monster-meets-Metron?).


*I have to admit that many conversations with the cartoonist Seth on the subject of the excellence of Ant-Man may have influenced this ranking.
Posted by BK at 11:12 PM

One thing to point out in case you didn't already know: The design for the Demon was cribbed from an early arc in Hal Foster's Prince Valiant. For more on this, check here: http://www.cbgxtra.com/columnists/opinion-xtra-online-columnists/the-jack-kirbyhal-foster-connection