To date, Marvel Comics and Disney do not acknowledge or credit Simon and Kirby for their creation. They receive no credit in comic book issues of Captain America and related titles (The Avengers, etc) and do not receive any royalties for the character or for reprints of their original stories from the 1940s. They receive no money from the Captain America movie which has grossed $362,584,292 worldwide. 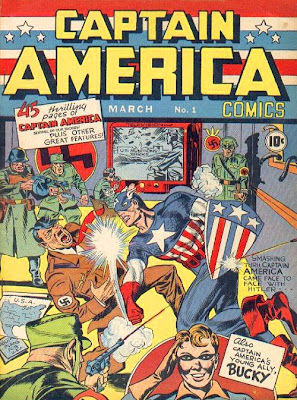 Joseph Simon was born October 11, 1913, in Rochester, New York. He worked as a newspaper artist and cartoonist before turning to the early world of comic books. In the late 1930s he met artist Jack Kirby and began collaborating with him. The pair created Captain America in 1941 and wrote and drew the first 10 issues of the Captain America comic book for Timely Comics (later Marvel).

They later moved to National/DC and created Sandman, the Newsboy Legion, the Boy Commandos, and Manhunter. Together they also invented romance comics and ran their own publishing companies (Crestwood, Mainline). In the 1960s, Simon moved into advertising, returning to comics briefly in the late-60s and reteaming with Kirby for a short period in the 1970s. As an artist and writer, and creator of several long-running characters and genres, Simon's contribution to American comic books and popular culture is immeasurable.

Please consider boycotting Marvel Comics until Joe Simon and the Jack Kirby heirs are given due credit for their work!
Posted by BK at 11:22 AM