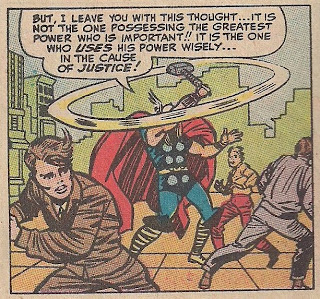 The Center for Cartoon Studies and Vermont Law School present:

Marvel vs. Jack Kirby: Legal Rights and Ethical Might

Jack Kirby was a defining cartoonist of his generation. From the 1940s through the 1960s, Kirby created or co-created the foundation that is the Marvel Universe: Captain America, the X-Men, the Fantastic Four, Thor, and the Avengers.

A billion dollar media empire is built on these superheroes.

Marvel, now owned by Disney, contends that Kirby worked under a work-for-hire agreement and his heirs have no right to the revenue his creations continue to generate for the company. A recent court ruling agreed with Marvel but appeals will surely follow.

Join The Center for Cartoon Studies’ Steve Bissette and Vermont Law School’s Oliver Goodenough as they discuss the legal, ethical, and moral issues of the Kirby decision for Marvel/Disney, the consumers of superhero stories, and the talent that creates them.
Posted by BK at 10:51 AM