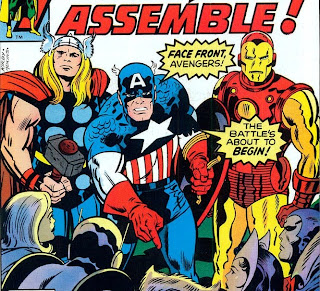 The Marvel Boycott continues. If you are just joining us, the Boycott started after Steve Bissette's reaction to Marvel's victory against the Kirby family's lawsuit. Fans were upset that Marvel and its owner Disney wouldn't even try to settle with the family of Jack Kirby, the man responsible for designing most of Marvel's greatest characters and for co-writing and drawing many of their original adventures back in the 1960s.

Item! The Jack Kirby petition at change.org is still going strong. The petition is called "Marvel Entertainment: Give credit and royalties to Jack Kirby and his family" and simply asks Marvel to properly credit Kirby as the creator and co-creator of all the stories and characters he had a hand in while working for Marvel, and to pay royalties for their use. Please check it out. 1,475 people have already signed the petition!!

Item! In the wake of the Avengers movie success, some large media organizations have begun to pay closer attention to Kirby and how he has been left out in the cold by Marvel/Disney. A recent article in the Wall Street Journal by Bruce Bennett, entitled "Fighting to Rescue the Lost Avenger", notes that things may be changing:

"With so many of Kirby's creations now firmly embedded in the popular consciousness, one might assume his contributions to the canon would be widely known. Yet few outside the Comic-Con velvet rope know his name. Even a shared screen credit with Mr. Lee and Captain America co-creator Joe Simon did not prevent CNN.com from attributing success of the The Avengers to 'the imagination of one man—Stan Lee' on Monday. But sky-rocketing auction prices and a new museum in his honor are signaling that Jack Kirby may finally have arrived. Randolph Hoppe, the director of the Hoboken-based nonprofit Jack Kirby Museum, said the man born Jacob Kurtzburg in 1917 remains 'one of the most underappreciated geniuses of the 20th century.'"

Item! Elsewhere, the Marvel version of reality, as presented by surviving Kirby collaborator and Marvel spokesperson Stan Lee, has come under fire from a website owned by Disney. Writing for the ESPN sports site Grantland, journalist Alex Pappademas quizzed Stan the Man about the recent controversy and asks Stan, who still gets paid about $1.25 million per year from Marvel, about creator rights:

I ask him if he feels, in general, that the comic-book industry has been fair to comic-book creators. "I don't know," Stan says. "I haven't had reason to think about it that much." Five-second pause. "I think, if somebody creates something, and it becomes highly successful, whoever is reaping the rewards should let the person [who] created it share in it, certainly. But so much of it is — it goes beyond creating. A lot of people put something together, and nobody really knows who created it, they're just working on it, y'know? But little by little, the artists and the writers now are a different breed than they were, and most of them, if they create anything new, they insist that they be part owners of it. Because they know what happened to Siegel and Shuster, and to me, and to people like that. I don't think it's a problem anymore. They make much more money than they used to make, when I was there. Proportionately. "Everybody thought that I was the only one that was getting paid off, but I never received any royalties from the characters. I made a good living, because I was the editor, the art director, and the head writer. So I got a nice salary. That was all I got. I was a salaried guy. But it was a good salary. And I was happy."

Item! Instead of boycotting The Avengers, alot of people are going to see it, and then donating some money, usually the price of the movie ticket, to a charity like the Hero Initiative, which helps out older comics creators with healthcare emergencies, and The Kirby Museum, which exists to educate the world about the life and work of King Kirby. These are both great charities and I would urge boycotters to donate to them as well. They do great work and you can send a message by mentioning that you are donating in memory of Jack or as part of the boycott. Tom Spurgeon at The Comics Reporter has found out that $3000 in donations have already been made in reaction to the Avengers controversy. Ultimately, I feel that the fans shouldn't have to resort to charity to support ailing creators and things like a museum for one of the greatest comics creators ever. Ultimately, these creators should receive fair compensation and royalties for their creations so that they can spend their golden years in peace and good health, and share their legacies with the world.

The Jack Kirby Petition at change.org 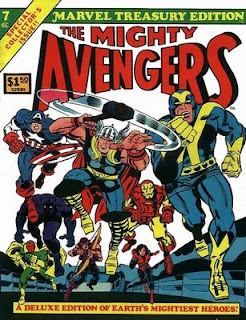