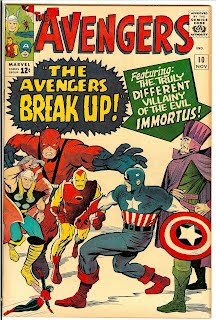 The Marvel Boycott continues. If you are just joining us, the Boycott started after Steve Bissette's reaction to Marvel's victory against the Kirby family's lawsuit. Fans were upset that Marvel and its owner Disney wouldn't even try to settle with the family of Jack Kirby, the man responsible for designing most of Marvel's greatest characters (including The Avengers) and for co-writing and drawing many of their original adventures back in the 1960s. Here is all the latest news about the Marvel Boycott:

Item! The Jack Kirby petition at change.org is still going strong. The petition is called "Marvel Entertainment: Give credit and royalties to Jack Kirby and his family" and simply asks Marvel to properly credit Kirby as the creator and co-creator of all the stories and characters he had a hand in while working for Marvel, and to pay royalties for their use. Please check it out. Over 1,500 people have already signed the petition!!

Item! Classy: Comic book artist, painter and writer Alex Ross is interviewed by journalist Elliott Serrano for one of his hometown papers the Chicago Redeye about The Avengers movie and Jack Kirby's legacy:

ES: What do you think of the argument that Marvel Entertainment owes the estate of Jack Kirby for his contributions to creating these characters?

AR: Keep in mind that Kirby’s family does not receive anything for participation in all these countless characters of his creation or co-creation with Stan Lee making their way into films, merchandise, and other media. Whatever deal they worked out with Stan Lee, they never did with him. By right, with each one of these new projects that still hales back to the work and ideas of Jack’s, there should be some kind of honorable compensation for how much it’s benefiting the company today.

Item! One of the biggest stories to come out of the Marvel Boycott was the news that cartoonist Roger Langridge has publicly stated he will quit working for Marvel as a result of the Kirby controversy and the company's general treatment of creators and creator rights. Langridge was interviewed by Michael Cavna at the Washington Post about his decision and the background. (Cavna has also issued a modest proposal at the Washington Post suggesting that Disney should gift a settlement to the Kirby estate.) Langridge is very articulate about his decision to stop working for Marvel:

I was always something of a tourist at Marvel to begin with. Writing for Marvel was not something I ever set out to achieve; I came up through the alternative comics publishers like Fantagraphics and by self-publishing my own work, so doing the odd thing here and there for Marvel always felt like a crazy detour in terms of where I wanted my career to go. As a result, I wasn’t that hard to convince to jump off.

Marvel’s shabby treatment of its founding creators, particularly Jack Kirby, has been a bone of contention for a lot of people since the 1980s, at least, so that underlying sense of discomfort was always there. It was the legal decision against the heirs of Jack Kirby last year that was the thing that made me think, “You know, I probably shouldn’t be doing this.” (Note: Marvel tells Comic Riffs it can’t comment on matters involving Jack Kirby due to ongoing litigation.) The cartoonist Steve Bissette wrote a very articulate and passionate blogpost that was widely circulated at the time of that ruling, and I read it and nodded my head and thought: Yeah, it’s probably time to get out. I didn’t make a big noise about it at the time because the thing I’d just written for Marvel, “John Carter: A Princess of Mars,” hadn’t yet come out, and I didn’t think it was fair to drag my collaborator on that book, Filipe Andrade, down with me if there was a backlash. I didn’t feel it was my place to make that decision for him.

A few months later, there was the business with Marvel taking down Gary Friedrich over his selling of Ghost Rider prints at conventions, which I felt Marvel/Disney dealt with in a much more heavy-handed way than they had to, essentially crushing the guy’s only source of income. At that point I mentioned to my wife, “You know, I really don’t want to do business with these people,” and she very matter-of-factly said: “Well, don’t. You’ve got plenty of work without them.” To her eternal credit.

Item! Of course, bestselling novelist and comics writer Chris Roberson was the first big name to publicly quit working for a major comics company over the issue of creator rights. His interview with Tim Hodler of the Comics Journal covers his reasons for quitting and the backlash from the fan community, as well as some interesting points about Kirby, Alan Moore, and the movement away from Dc and Marvel:

if DC and Marvel were to grandfather their current equity deals back to 1938 that they would obviate the need for the lawsuits that many of the creators and their estates continue to bring and that also they would have a public relations bonanza on their hands because they would be able to show how they were taking care of the people that made these characters that people cherish now. In much the same way that Time Warner settled with Siegel and Shuster in the ’70s so they could trot them out for the premiere of the Superman movie. How great would it be if Time Warner could point to how they were helping pay for Tony DeZuniga’s hospital bills while they were promoting the Jonah Hex film, or whatever the case may be. I think if they took better care of the people who created the characters that other hands now service, that would do a great deal to engender fonder feelings on my part.

One other thing I would add is that if DC and Marvel did retroactively grant the creator-equity deals to their former creators, we wouldn’t need a Hero Initiative now, because those guys would be getting money. It would reduce the profits a miniscule amount for the larger corporations, but it would take care of entire generations of now dying old men and women who have gone on to see their creations continue to generate revenue they or their children don’t have any part of.

Item! One of the more touching things I've heard recently is listening to cartoonist and publisher Zak Sally talking to Robin McConnell on the Inkstuds podcast (around the 50-minute mark) about explaining Jack Kirby and the Avengers movie to his 6-year-old son and how his son understands the injustice of the situation better than some adult comic book fans. Sally has written a longer response to the issue on his own blog and his comments are worth reprinting here:

"actually, over the course of writing this, i think i DO have an answer– not THE answer, but an idea anyway: it’s somewhat presumptive on my part, and it is NOT what “should” happen, but it falls under the category of “the least you could do”.

i think Marvel comics should pay for the Jack Kirby Museum. they should fund the thing in its entirety, right now– and not a temporary, pop-up (which would still be awesome), but a permanent, brick and mortar space. what is that– 10, 20 million bucks to do it right? that’s a drop in the bucket. and all profit from the museum in perpetuity could go to the Kirby estate.

and there’s where the presumption comes on my part– what SHOULD happen is that Kirby is given some credit on all his creations and a commensurate slice of the action. but i don’t think that’s going to happen; do you? so, this would be a simple, classy way to honor the man and his contribution, without endangering their precious legal status as “creators” of the work in question (and, again, as i write this– all of you who are yelling about “well, they did it under a work-for hire contract”, which, yes, is legally binding– what you are then saying is that THE CORPORATION IS THE CREATOR OF THE WORK AND CHARACTERS, both morally and legally. that, effectively, NO ONE CREATED the stuff, just this amorphous, profit yielding, non-human entity. you’re ok with that, as an ongoing and seemingly perpetual situation? HAVE FUN.)"

"if you’re touched by The Avengers, or any of the cavalcade of Marvel movies, you owe it to yourself to learn who this Kirby guy was. The Marvel industrial-promotional complex certainly won’t tell you."

The Jack Kirby Petition at change.org