7 Things Journalists Should Know When Writing About the Avengers Movie 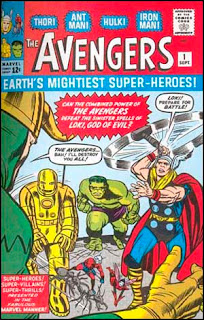 1. The Avengers were created by Jack Kirby and Stan Lee in 1963.

Although the characters in the comic book had appeared elsewhere, they were first brought together as a team in the The Avengers #1, published by Marvel Comics. Stan Lee, cousin of Marvel's publisher, was the salaried editor and senior writer at the company, while Kirby worked as a freelancer, being paid a flat rate for every page of art that was published. Although the exact division of labour is not known, Lee and Kirby shared co-plotting duties, with Kirby drawing the story in comics form, and Lee adding dialogue from Kirby's notes afterword.

2. Neither Lee or Kirby ever received any royalties or copyrights for their creations or stories.

The Avengers comic book series has been almost continuously published by Marvel for close to 50 years. The original stories by Kirby and Lee have been reprinted in different comics and books hundreds of times, and there have been spin-offs, foreign translations, toys, videogames, and animated cartoons, but not one cent of the millions of dollars collected by Marvel has gone to paying royalties to the original creators.

3. Jack Kirby died in 1994 without ever receiving royalties for the Avengers or any of the other characters or stories he co-created while working for Marvel, including Captain America, Thor, Iron Man, The Hulk, Nick Fury, The X-Men, The Fantastic Four, and many others.

4. Stan Lee has continued to work as a spokesman for Marvel and currently earns a million dollars per year from the company and is credited as an Executive Producer on the Avengers movie.

While acting in this capacity, Lee testified in court that he was the sole creator of the Marvel characters and that Kirby acted only on Lee's instructions in illustrating the stories.

5. The family of Jack Kirby is currently engaged in a lawsuit with Marvel Entertainment and its owner Disney for control of the copyrights of the characters and stories Kirby had a hand in creating, including The Avengers.

6. Although Kirby is mentioned in the closing credits of The Avengers, and although the basic plot of the film follows the original Avengers comic book, Kirby receives no story credit and his heirs do not receive any compensation for the use of the characters.

7. Over the last year there has been a growing backlash against Marvel and The Avengers movie, with many fans and comic book creators lobbying for a change in Marvel's policy towards crediting and compensating Jack Kirby.

Comic book artists Stephen Bissette and James Sturm have urged a boycott of the Avengers film and so far 1,400 people have signed a petition on change.org asking Marvel to pay royalties to the family.