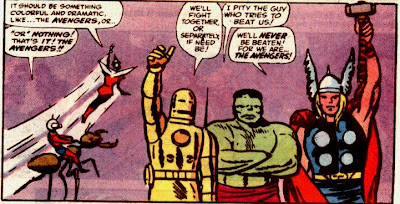 Around the world with the Marvel Boycott:

Item! The Jack Kirby petition is still going strong and is approaching 1,400 signatures! If you disagree with Marvel's treatment of Jack Kirby's legacy and think that Kirby should share in the credit for the stories and characters he created, please go to change.org and sign the petition. Please share it with your friends, share it at your local comic shop, tweet about it, link to it on Facebook, anything. Just please help get the word out.

Item! The best piece of writing this week about how Marvel Comics and DC have mistreated the artists who work from them comes from journalist and critic David Brothers. Brothers' essay on Comic Alliance, The Ethical Rot Behind 'Before Watchmen' & 'The Avengers' is a heartfelt, blistering analysis of the history of DC's mistreatment of Alan Moore and his Watchmen graphic novel and Marvel's attempt to erase Jack Kirby from the history of the company and from the upcoming Avengers movie, all while continuing to fight the family of Jack Kirby in court. After reading it you may understand why Brothers has given up buying and reading all comics from both companies:

"Why doesn't Marvel honor Kirby's legacy by making his work available to the people of the future and giving him what he's due, after years of screwing him over? You call him "King." Treat him like one."

Item! Lastly, the best thing last week was this wonderful memoir by Jack Kirby's son, Neal Kirby, about growing up in the house where The King was creating the Marvel Universe. A very touching article in the Los Angeles Times that really gets at the heart of what Kirby did and what he was like as a human being. Everybody should read Growing Up Kirby: The Marvel Memories of Jack Kirby's Son:

"My father drew comics in six different decades and filled the skies of our collective imagination with heroes, gods, monsters, robots and aliens; most of the truly iconic ones are out of the first half of the 1960s, when he delivered masterpieces on a monthly basis. I treasure the fact that I had a front-row seat for that cosmic event."

Cartoonist Seth on the Marvel Boycott
Posted by BK at 9:35 AM