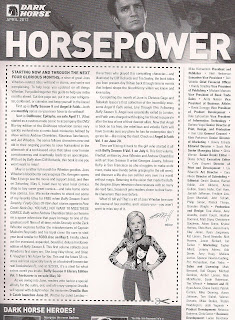 So, I bought the first issue of Peter Bagge's new comic book Reset this week and enjoyed it. The book is published by Dark Horse Comics as part of their DarkHorse Originals line of creator-owned genre work. Other creators being published by this line include Gilbert Hernandez and Matt Kindt. The company has a good track record of publishing quite a few creator-owned series that have become big hits and benefited both creators and publisher enormously, most notably Mike Mignola and his Hellboy empire, but also including Eric Powell's The Goon, and series by John Byrne, Frank Miller, and many others.

I don't buy too many Dark Horse books beyond the very occasional Hellboy or Hernandez Bros side-project so it's been awhile since I've had a chance to peruse one of their periodicals. Besides some modern and progressive publishing deals in the creator-owned field, I believe the bread-and-butter of Dark Horse is in the realm of licensed and branded comics series like Star Wars and Conan. One of the "brands" that they publish are comics based on characters and media properties created and developed by director-writer Joss Whedon (Buffy the Vampire Slayer and its various "Buffy-verse" spin-offs).

My copy of Bagge's Reset features the April 2012 edition of the company's Horsepower column, a monthly hype-advertorial page like the old Marvel Bullpen Bulletins, and this month's column is devoted to Joss Whedon, or rather, "a slew of great Joss Whedon-related titles" that will be arriving in comic shops over the coming months. All well and good. The company is doing its job hyping the books they publish. My problem is a short blurb for the Avengers movie that is stuck into the 3rd paragraph of the column, urging Whedon fans to see a movie produced by a Dark Horse competitor, in the same breath that they hype the various Whedon-related product on offer for Free Comic Book Day:

"May is rather a full month for Whedon goodies. Joss Whedon's blockbuster extravaganza The Avengers opens May 4 (so go see the movie and support Joss), and then on Saturday, May 5, head over to your local comics shop to buy some great comics --and take home some free comics, too..."

Now, my problem with this is not the good-natured cross-company promotion but rather the matter of credit. Of course, Whedon is credited as writer and director of the film, which nevertheless the producers (ie, Marvel/Disney) are calling "Marvel's The Avengers." But Jack Kirby and Stan Lee created the Avengers and Kirby had a hand in the creation of the majority of the main characters who will be featured in the film, including Captain America, Nick Fury, Thor, and Iron Man. So here we have an example of a company known as the anti-Marvel for its pioneering work with promoting creator-owned genre material, shilling for Marvel, and helping to erase the name of Jack Kirby from a movie based on his work that is generating tons of money for other people. Besides his million dollars per year from Marvel, even Stan Lee is getting a cameo in the film and I believe may also get a writer credit (or something like "based on the comic book by ..."). Everyone except Kirby and his family seems set to get credit and profit from the film. Kind of gross that Dark Horse has to help promote it.

[Yes, I am aware that most of the Whedon-verse comics are produced using work-for-hire contracts. And no, I don't know who the writer of the Horsepower column is, although it is signed "editor" below an illegible signature.]

The Jack Kirby Petition at change.org
Posted by BK at 1:46 AM