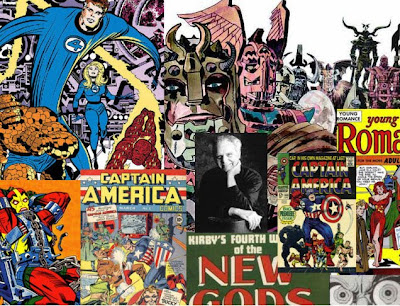 Catching up with some links about the ongoing Avengers movie protests.

Item! First things first, please sign and share the Jack Kirby petition at change.org. Over 1300 people from all over the world have already signed this letter asking Marvel Entertainment and its owner Disney to start paying royalties and giving credit for characters and stories co-created by Jack Kirby.

Item! It's worth reading the comments section to this episode of the Savage Critics "Wait, What?" podcast, hosted by Jeff Lester and Graeme McMillan. The discussion concerns Lester's struggle with buying comics from Marvel. He wonders if he is really taking part in a formal boycott or if his only making an individual ethical choice, sort of like the decision to become a vegetarian. What makes a boycott? Is it, as one anonymous poster claims, "an actual organized campaign to presshttp://www.blogger.com/img/blank.gifure a target to cave into a demand or a set of demands"? Or can a boycott include simply the decision not to give Marvel money, as long as many other people have come to the same decision (a sort of "de facto" boycott), as commenter Kevin Huxford argues?

Item! Lastly, at the Jack Kirby Museum, Rob Steibel has been using his Kirby Dynamics blog for the past week for a series where he pretends to interview Stan Lee about his collaborations with Jack. It's a great series. Rob's premise is twofold. He argues that since the judge's decision in Kirby family's case against Marvel hinged entirely on Stan's testimony and claims that he created Marvel, and because nobody ever seems to ask Stan any hard questions about the conflicting stories he's told over the years, there are a lot of unanswered questions. The whole thing is done with a sense of humour since thehttp://www.blogger.com/img/blank.gif Stan/Jack credit question is such a tired debate for so many fans. Rob summarizes the series in his last post but there are many diversions including a debate with Greg Theakston and a summary of the debate on facebook. Along the way, much is made of the infamous "synopsis" of Fantastic Four #1, which Stan and Marvel claim is proof of Stan's arguments. If you are at all interested in these matters, you should really read everything here.

Please send me your links and comments about the Marvel boycott and Jack Kirby.
Posted by BK at 12:09 PM