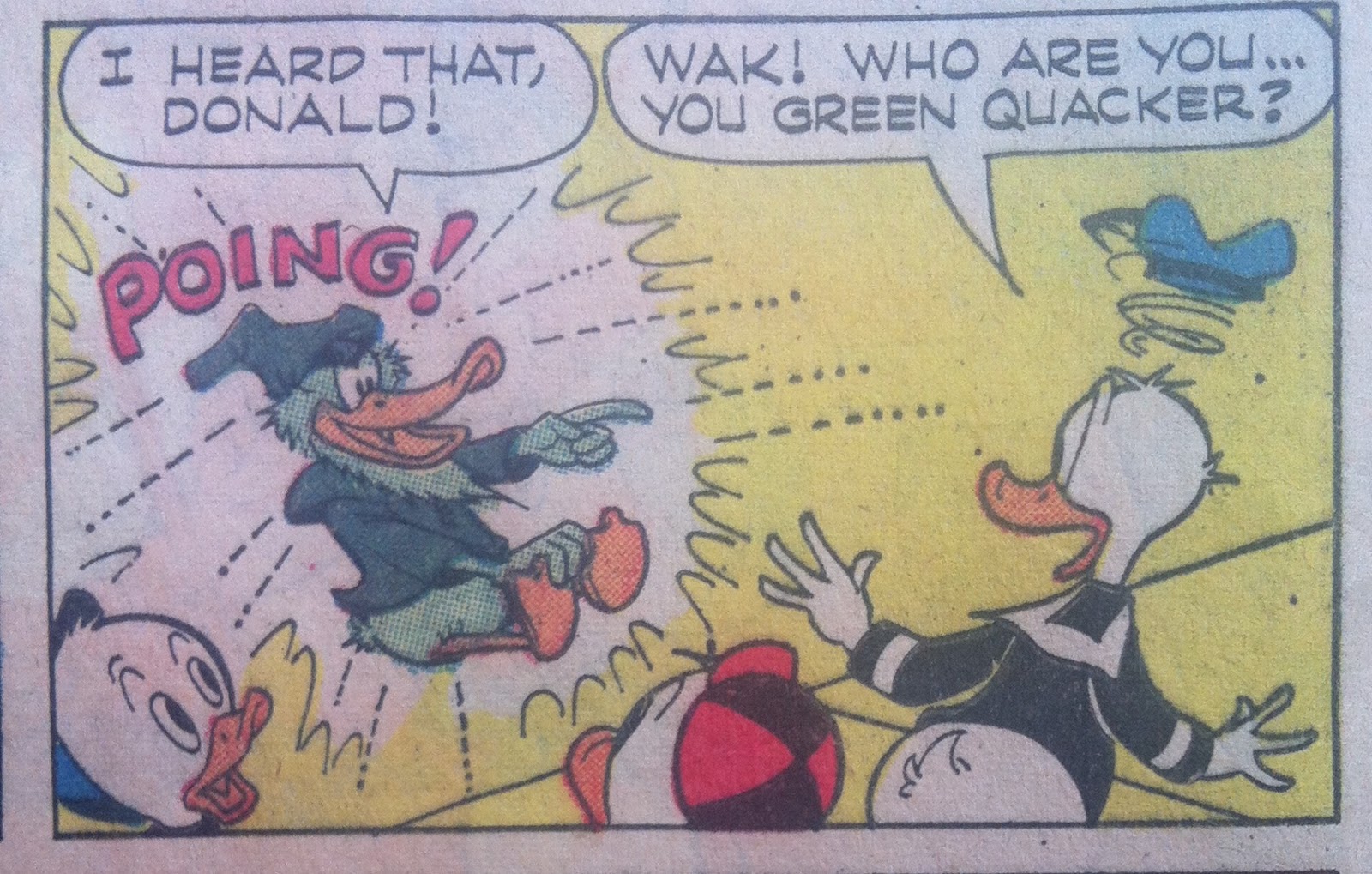 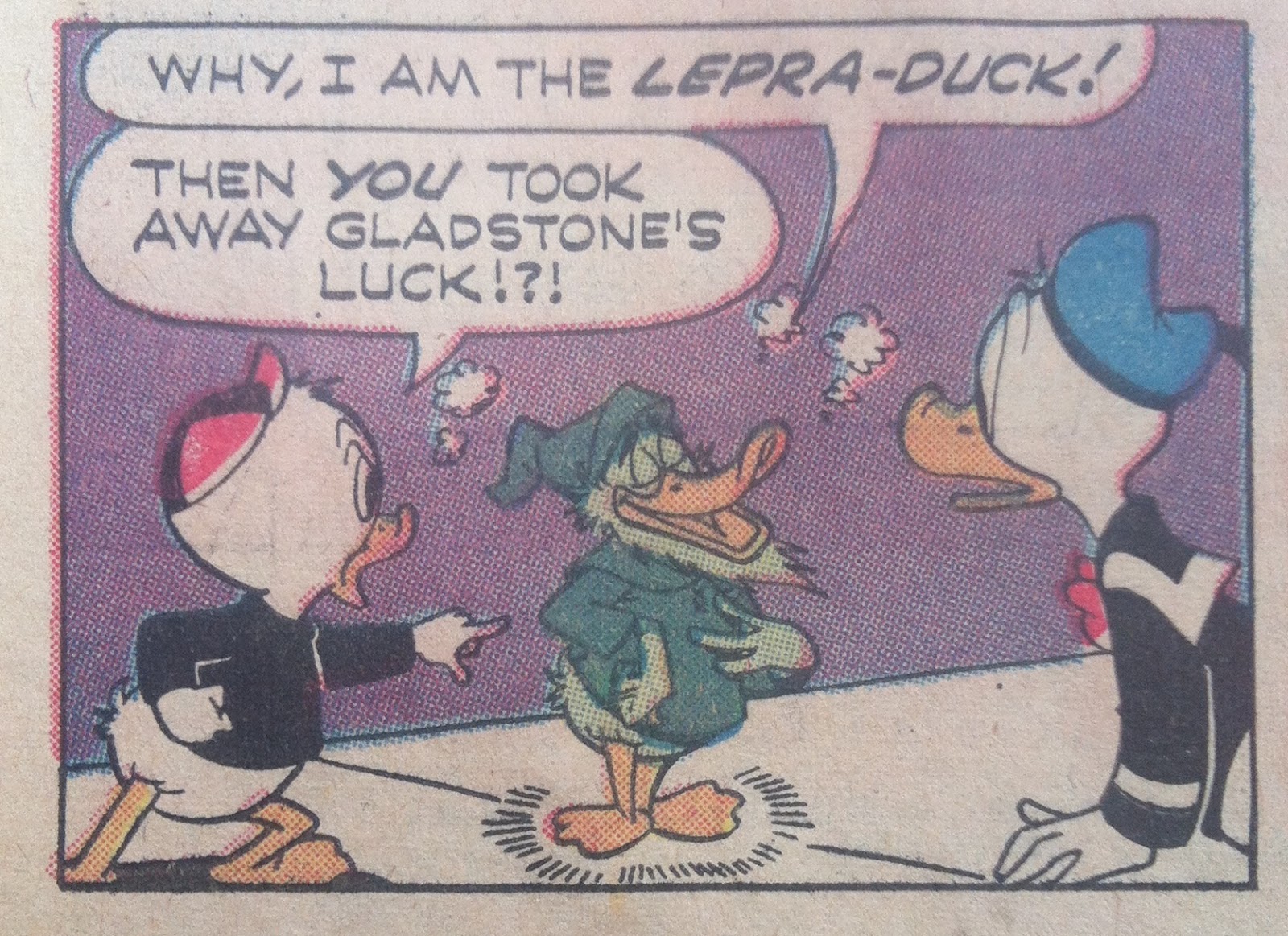 Panels from the first appearance of The Lepra-Duck from the story "The Battle at Hadrian's Wall", the cover-feature of Walt Disney's Donald Duck #107 (Gold Key, May 1966). The story was written by Vic Lockwood and drawn by Tony Strobl. In the story, Donald is given the Lepra-Duck's wishing stone, previously in the possession of Donald's lucky cousin Gladstone Gander, and, through a series of wishes, first travels to Uncle Scrooge's ancestral homeland of Scotland, and then back in time where he and his nephews meet Emperor Hadrian and some of Donald's own "barbarian" ancestors who they teach to play baseball!

The Lepra-Duck is in the tradition of puckish magical interlopers like Superman's Mr. Mxyzptlk, Batman's Bat-Mite, Aquaman's Quisp and Quirk, Impy from The Fantastic Four, and Gazoo from The  Flintstones. Like these other characters, he magically appears to vex the main characters and introduce some sorcerous obstacle or faux-helpful spell. The Great Gazoo was introduced a year earlier on tv and is a likely influence on the Lepra-Duck, and ditto Lucky from the Lucky Charms cereal ads (first appearance 1963), although leprechauns are plentiful in fiction and popular culture, as is the idea of a magical token like the Wishing Stone (cf. Monkey's Paw) or the tradition of wishes that act as a form of hubris and backfire to punish greedy or prideful.

There are other magical characters in Donald Duck's world (Magicka de Spell) and the concept of luck is central to the characters of both Uncle Scrooge and Gladstone Gander, but we rarely see magic used as a form of time-travel. Rather, the characters in these stories interact with historical places and artifacts in the modern era.

As a kid I hated it when Bat-Mite would pop up in the Batman cartoon show. I wanted Batman to be a serious superhero and the existence of this magical elf from another dimension, constantly getting into bumbling slapstick adventures while trying to help his "hero" Batman, really put a damper on my suspension of disbelief, to say the very least. I was a little bit more forgiving of The Great Gazoo because the Flintstones was a comedy show and the wonderful droll voice acting of Harvey Korman really put the character over. As an adult, I love all of these magical characters and prefer the older superhero comic books with a sense of humour.

I came across this character in a really beat-up and coverless copy of a Donald Duck comic that I was actualy about to throw in the garbage. after investigating I was surprised that a) this seems to be his only appearance and b) there isn't really anything online about him, even on websites run by ultra-nerdy Dinsey comics fanatics in Europe, like the Inducks wiki. The story he appears in has been reprinted at least once, so thousands of kids and older fans have read it. Obviously, the cliche magical deus ex machina nature of the character has left a sour taste in the mouth of fans who love the mostly well-plotted, logical stories of the Barks Ducks universe. Or maybe it's just not that memorable of a story. The character really only appears in a few panels at the beginning, popping back in for a few more panels at the end to take back his wishing stone. 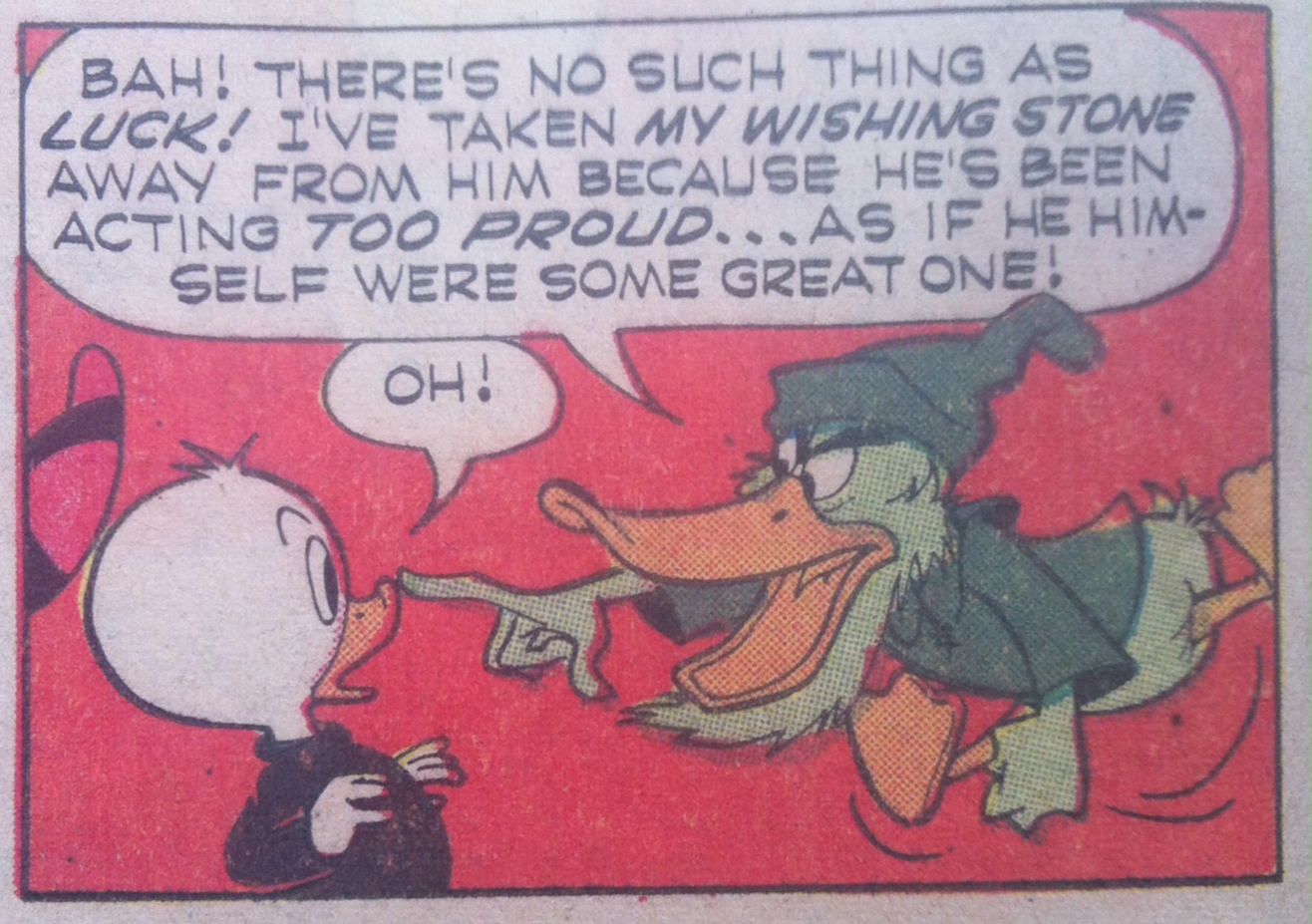