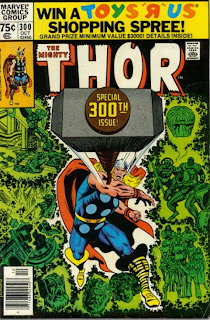 Tom Spurgeon celebrated the 200th edition of his "Five For Friday" feature with a list of anniversary comics and events today. My own list is represented but there are lots of other books to look at there. And lots of chances to wonder "Why are anniversary editions of comics so crappy?" Too much pressure coupled with the inability of most kids comics creators of decades past to cobble together longer narratives on a monthly schedule. Still, I have nostalgic fond feelings for many of the 70s-80s comics on the list. Avengers #200 (Ms Marvel has a baby after being raped by a cloud who turned out to be her own son, or something, in a notorious story by Jim Shooter/Bob Layton/David Michelinie and art by George Perez that I absolutely loved as a kid in 1980) is just one "classic" anniversary comic of woe. I like the "War in Heaven/Everything-but-the-kitchen-sink"-style bloated epics like Thor #300 and Swamp Thing #50. Superman Family #200 is an awful comic that I nontheless treasure. But the best of the bunch from the lists at Comics Reporter is the awesome "big butt" cover from Hate #30. Because you can't spell classic without "class" and "ass".
Posted by BK at 1:15 PM

I just found your comment/reply to my spirograph post today.

I did not know that Guelph was home to The Canadian Comic Art Centre! Is it a real-world place or an internet place? I just moved to Guelph, must know more!

Anyway, send me an email at rho_mulder@hotmail.com and I'll send you my address and we can trade mail even though we live in the same city.