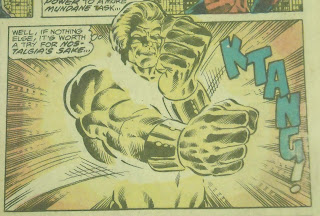 Received a small Mystery Hoard of 1970s-80s comic books yesterday. The person who brought them into the shop is an acquaintance of mine who works in the waste management industry and the books are a little crispy, as if they were once moist or among moist garbage and then dried-out under a lamp or something, but they don't have any smell besides that nostalgic old paper aroma.

Captain Marvel #58 (1978) An issue of one of those second-string superhero comics from 70s Marvel, illustrated by Pat Broderick. This is the kind of cartoonist I used to be dismissive of, but now see he has an interestingly dynamic approach to panel design and figures. Awkward-seeming but vigorous, if you know what I mean. Inventive. Lush inks, by Bob McLeod, that nicely highlight the tight, well-muscled buttocks of the protagonists --when Mar-Vel fights Drax the Destroyer it looks like two oily seals frolicking in the ocean. The book also has some nice colour effects which I've just checked and discovered are by "F. Mouly" --who I assume is RAW magazine founder and Toon Books editor Francoise Mouly so that explains that. The story by Doug Moench is a boring slugfest redeemed by a few panels of typical "70s Marvel-style" soul-searching involving Capt Marvel wandering around Denver, Colorado in a leather jacket.

Invaders #32 (1978) Classic Jack Kirby cover featuring Hitler and Thor wraps up an adventure of Roy Thomas' retro superteam, with art from the team of Alan Kupperberg and Frank Springer. Great sketchy, anxious-looking cartooning with figures composed of angles and planar surfaces. Characters squat and twist to fit into the panels. Lots of leiber gotts, etc. Bonus: a surprise appearance by Josef Stalin. The Invaders have to protect the mass-murderer from Russia from their future ally, the God of Thunder. A weird pop political artifact.

Thor #281 (1979) Totally forgettable story of Thor fighting the Space Phantom in limbo, trying to find his hammer, and then getting stuck in one of those time/space nexus thingies. Post-Buscema art by Keith Pollard and Pablo Marcos. Lame dialogue sample: "The fool has fallen into the trap as planned --baited with my lies about his hammer. His immortal body will serve as a timeless cork --plugging the hole from real-time into limbo..." I think this might be the philosophy behind the upcoming Kenneth Branagh Thor movie.

Fantastic Four #220 (1980) One of the early "all-Byrne" issues, 220 has a dramatic red and black (and pink and yellow and white) cover. Very undramatic storytelling from Byrne does little to enhance a plot about a mysterious alien invasion and crystalline structures, interspersed with slice-of-life vignettes of the first family of superheroes shopping, etc, in the nostalgic Lee-Kirby vein. Questionable highlight: the team flies to the North Pole with a cameo from Byrne creation Guardian, the Canadian superhero.

Fantastic Four #224 (1980) The FF go back to the North Pole and encounter more crystals housing a lost city of vikings, in a horrible story by Doug Moench illustrated in a boring pedestrian post-Adams style by a young Bill Sienkiewicz.

Marvel Two-in-One King-Size Annual #3 (1978) An epic issue of the Thing team-up title guest-starring "The Man Called Nova" in another bland story (plot and dialogue by Marv Wolfman) about an alien invasion. Lots of repetition in this Hoard. The art is by the majestic Sal Buscema, one of my favourite oddball 70s artists. His weirdness is kind of damped down here, unfortunately due to the uninspiring material and deadline, I'm sure. Some nice green aliens and women with pointy breasts (not as banana-shaped and pointy as Infantino breasts, though). Sal cranked-out 33 pages of layouts for this annual which were then inked without love by Dave Hunt and Frank Giacoia. I thought I would like this the most, but it's kind of a disappointing waste.
Posted by BK at 3:40 PM