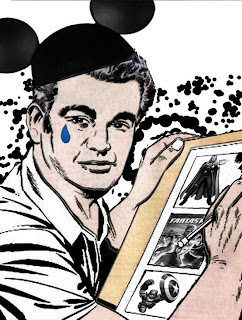 This being Labour Day, a few notes from around the web on Jack Kirby, worker, architect, genius, and work for hire.

The late Jack Kirby's heirs were denied any share of the copyright to his Marvel Comics creations in federal court -- including Thor, the Fantastic Four, and the Hulk, the Avengers and the X-Men. Stephen R. Bissette has called for comics readers and filmgoers to boycott all Marvel Entertainment products based on the 1960s creations of Kirby, the man behind many of that company's most enduring icons.

I came across this 2010 Vice article from Dan Nadel on Kirby. Nadel put together a Kirby exhibit recently and his thoughts on Kirby's art, career arc and creative process are still timely.

A man with this attitude, combined with a strong sense of loyalty and a need to provide for his wife and three kids, was going to have a hard time. A tortured time. Kirby, who grew up poor and Jewish on the Lower East Side, was godlike in his abilities. He was a one-man mythos machine, and he knew it. But he was powerless in all other practical matters. So when the movie deals were announced and the animated cartoons aired and other artists began steering his characters, Kirby was angry. All he could do was leave.


In other news, the Kirby Museum's Simon and Kirby columnist Harry Mendryk writes a great article about the evolution of one of Jolly Jack's great visual devices, "Kirby Krackle."

The Kirby Krackle prototype from “The Negative Man” is very similar to that found previously in “The Man Who Collected Planets”. However while Kirby inked his own pencils in the earlier story some other artist inked “The Negative Man”. I am not positive as to who that inker was but the blunt but fluid brushwork looks very much like the work of Marvin Stein so I questionably attribute it to him. The two stories are similar enough that perhaps Stein used the earlier Kirby inked story as a reference when inking this one. Or perhaps Kirby had already begun to include how a story should be spotted in his pencils. In either case the use of the Kirby Krackle in this story should be credited to Jack Kirby.

And finally, blogger Michael Buntag has joined the boycott. Welcome aboard, Michael!
Posted by BK at 6:29 AM